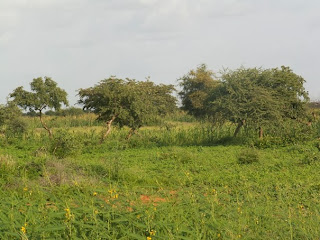 This was barren land in Central Niger less than 15 years ago. The use of simple water harvesting techniques restored the land to productivity.


It has taken much longer to produce this update than predicted in update no.3, but the advantage is that we have a lot of good news to report.  There is a growing interest in restoring degraded land using a mix of proven practices, including farmer-managed re-greening.

Two major new projects with re-greening components
The Netherlands development cooperation decided in July to approve a 50 million US dollar regional project for Mali, Burkina Faso, Niger, Kenya and Ethiopia. This regional project wants to enhance food and water security for economic growth.  The World Agroforestry Center formulated the proposal and is responsible for its implementation. The on-the-ground work will be done mainly by non-governmental organisations.
Until now a number of proven practices have often been applied in isolation, but this project will as much as possible integrate re-greening, water harvesting and the use of small quantities of chemical fertilizers (micro dosing). 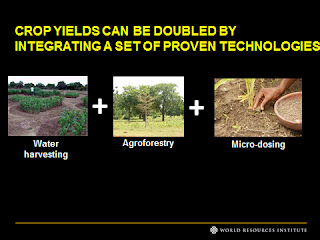 A first planning workshop was already held in Ouagadougou in August. Start-up workshops will be held in October and it is expected that activities will start soon.
The US Agency for International Development (USAID) is funding the REGIS-ER  project in Burkina Faso and Niger.  REGIS-ER stands for Resilience and Economic Growth in the Sahel-Enhanced Resilience. It is a 5 year and 70 million $ project, which will be implemented in Burkina Faso and in Niger.
These two major new projects mark the beginning of increased investment in the drylands across the Sahel.  The costs of emergency aid are high. In 2012 alone the costs of humanitarian aid amounted to one billion US $.   It is less expensive to support dryland communities to build resilience to drought, which makes people less dependent on emergency aid and can significantly lower its costs. As mentioned in previous updates, during drought years the rural poor literally survive on on-farm trees. When crops fail, trees continue to produce fruit, fodder, firewood, medicines.
Follow-up to study visit by Nigerian delegation to Niger in May 2012
In May 2012, a delegation from Nigeria visited farmer-managed re-greening in Southern Niger to draw lessons for policy and practice in Northern Nigeria.  One of the participants in this study visit was a key staff member of the European Commission in Abuja and it is no coincidence that the Commission is now funding a new agroforestry project in one of the northern states. A follow up can include a visit by Dennis Garrity (World Agroforestry Centre) to the Federal Minister of Agriculture as well as a visit by farmers from Niger to Northern Nigeria to explore with their peers the major reasons behind the low on-farm tree densities in parts of that region.

Positive developments in other regions
At the Conference of Parties of the UN Convention to Combat Desertification in Windhoek (Namibia) in September Dennis Garrity mentioned that the Government of India has decided to invest hundreds of millions of US$ /year in agroforestry through the states.
Sri Lanka is creating an Asia-Pacific Institute for Evergreen Agriculture, which will be launched in November during the Conference of Commonwealth Heads of State.
World Vision Australia has launched an excellent website on farmer-managed natural regeneration. The website provides information about re-greening activities by World Vision and it offers opportunities to download relevant publications.

Land for Life Award and Global Dryland Champions 2013
During the recent Conference of Parties of the UN Convention to Combat Desertification in Windhoek (Namibia), Tony Rinaudo of World Vision Australia received a Land for Life Award for his dedication to re-greening in drylands. Tony helped catalyze the re-greening process in Niger’s Maradi region in the middle of the 1980s. Tony and World Vision Australia are now promoting re-greening in 14 countries !!
Yacouba Sawadogo and Chris Reij were both honoured with a Global Drylands Championship Award. Yacouba’s life, work and impacts feature in the documentary “The Man who stopped the desert”. His innovations in water harvesting allowed the restoration of tens of thousands of hectares of severely degraded land across parts of the West African Sahel. Besides this he has created a very diverse 23 ha forest with more than 60 species of trees and bushes on land that used to be completely barren.
http://www.1080films.co.uk/trailer-manwho-full.htm

The documentary will soon be shown on Kenya Airways flights.
Chris received the award for his relentless promotion of African Re-greening Initiatives.
Both Yacouba and Chris were given an opportunity to make a key note presentation at the High-Level Summit of the Conference, which was attended by about 200 people (delegation leaders of the countries represented at the Conference of Parties, Ministers of Environment, representatives of NGOs). 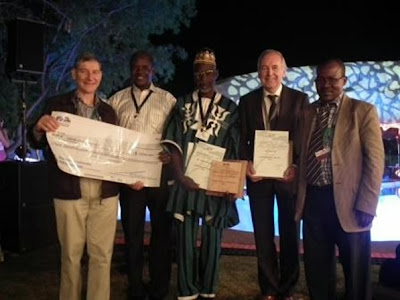 From left to right: Tony Rinaudo (World Vision Australia), Mathieu Ouedraogo (Reseau MARP, Burkina Faso); Yacouba Sawadogo (“The Man Who Stopped The Desert”, Burkina Faso); Chris Reij (World Resources Institute, Washington DC) and Mahamane Larwanou (African Forest Forum, Nairobi).
Scaling up re-greening and restoration of degraded land by building on successes
Every year millions of hectares of productive land are lost due to deforestation, urbanization, overgrazing,  degradation of agricultural land and drought.   One thing is certain, we lose productive land at a rate which is much faster than the rate at which degraded land is restored to productivity.  Increasing the rate of restoration of  degraded land  will be vital for feeding  9 to 10 billion people in 2050 and for rural economic growth.

Improving land and water management
The World Resources Institute has just published a working paper on Improving Land and Water Management. The accent in this report is on the drylands in Africa. It analyzes the impact of a number of promising land and water management practices and how they contribute to improving food security for a growing population. The techniques discussed in this paper include agroforestry, conservation agriculture, rainwater harvesting and integrated soil fertility management.  Below you’ll find a link to this paper.