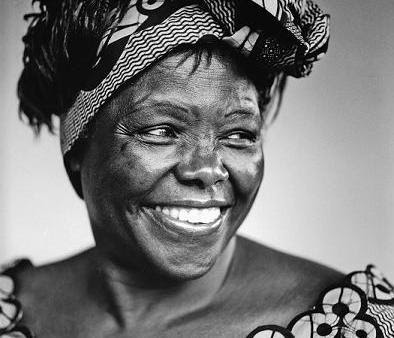 Wangari Maathai
From September 5 – 16 I was in Nairobi to meet with the World Agroforestry Centre (ICRAF), the Green Belt Movement and many other organisations. Almost everyday I travelled to and from my hotel to ICRAF…and every time I looked at a piece of beautiful and diverse forest in the city. The driver explained that it is the Karura Forest and he said..”it’s still there because of Wangari Maathai…in the 1990s the forest was given to developers who wanted to build big houses, but Wangari Maathai resisted this development”. On my way to the Kenyan Forest Research Institute, a driver made a similar remark about another forest.

Later I understood that resisting the developers meant that she was beaten up badly and even had to be hospitalized, but as soon as she got out of the hospital, the first thing she did was to go back to the forest to continue action….that’s courage…and she, and those who supported her,…won the battle.

She will always be remembered because she created the famous Greenbelt Movement, which planted tens of millions of trees in Kenya’s Highlands and she won the Nobel Peace Prize in 2004, because of her relentless work not only for the environment, but also for democracy, peace, women’s rights and empowerment of the poor.

On September 23 I had the privilege to be in a meeting with Prof. Karanja Njoroge, the Executive Director of the Green Belt Movement, during which he unveiled a plan for creating a Wangari Maathai Institute for Peace and Environmental Studies at the University of Nairobi. I assume that funding will be mobilized to create this institute in memory of Wangari Maathai. One thing is certain…with or without this institute, she will continue to live in the hearts and minds of many people in and outside Africa for who she was, for what she did and for the difference she made.

Exploring a re-greening initiative in Kenya

Many parts of Kenya’s highlands have high on-farm tree densities and Grevillea robusta is a common species. Kenya is the only country in the world that has a Constitution which requires farmers to have 10% of their land under trees. Kenya has its successful Green Belt Movement…so why go to Kenya to explore a re-greening initiative?

The answer to this question is that almost all re-greening in Kenya is concentrated on planting of trees in the Highlands of Kenya and much less on Kenya’s drylands (about 80% of the country). Very little attention is paid to the potential of promoting on-farm and off-farm re-greening through the protection and management of natural regeneration.

This visit could not have come at a better moment as the Ministries of Agriculture and of Environment have started reflections about how to implement the 10% rule.

Dennis Garrity, DG of ICRAF till September 16, and his staff, provided all possible support to make this visit a success. Without their support much less would have been achieved. Meetings were held amongst others with:

The next step will be a regional meeting in Kenya on re-greening, which will be organized by World Vision. Tony Rinaudo of World Vision Australia plans to be in the region from March – May 2012. His visit will include practical training in farmer-managed natural regeneration. All persons met during this visit in first half of September will receive the ARI updates and will be informed about the regional conference in March 2012.

In the week of September 12 – 16, ICRAF had its Science Week, which meant that most ICRAF researchers were in Nairobi. This provided an extraordinary opportunity for discussion with researchers in-between meetings in town. It was possible to meet regularly with Dennis Garrity, who after having done two terms as DG of ICRAF will now become responsible for ICRAF’s Evergreen Agriculture Initiative, Phil Dobie (policy advisor), Moctar Touré (senior fellow), Ermias Betemariam (landscape ecologist), and many others.

The re-greening movement is expanding
Met in Nairobi with Roland Bunch, the author of “Two Ears of Corn” (www.rolandbunch.com). Roland worked for many years on cover crops in central America and is now very worried about declining soil fertility in many parts of Africa. Roland recently visited the on-farm re-greening in Mali’s Seno Plains and wants to join the ARI movement, which is very good news, because he brings with him vast experience and a big network.

At the same time a message arrived from CIKOD-Groundswell in Northern Ghana (www.groundswellinternational.org) with the request…can we join the re-greening movement? We want to promote re-greening in Northern Ghana and will try to mobilize our own funding. My reaction…yes, of course…you make my day. More about this in the next update.

Presentation at World Bank TerrAfrica of “The man who stopped the desert” followed by discussion. About 30 persons attended, including Mary Barton-Dock, Director Environment, Martin Bwalya, Head of the Comprehensive African Agriculture Development Program (CAADP) of the New Partnership for Africa’s Development (NEPAD) and Paola Agostini of TerrAfrica and Regional GEF coordinaotor. The documentary was followed by a lively exchange about the role of farmer innovation and about farmer-managed re-greening.

This film is a wonderful piece of storytelling that recounts many critical lessons in the pursuit of economic and environmental sustainability in the Sahel. Yacouba's thriving farm and forest -- and the land rehabilitated by others he inspired -- show that individual champions and local communities can achieve much. But the film also shows that these remarkable achievements need to be underpinned by a strong policy and institutional environment, such as enforceable local resource rights and government accountability.

A follow-up presentation/meeting will be scheduled early in 2012.

Presentation at US Agency for International Development about “How can USAID help feed the future”. This presentation, which was organized by natural resource management specialists Chris Kosnik and Mike McGahuey, was also attended by 3 staff of the Food Security Bureau. It was followed by a meeting with Christian Holmes, USAID’s Global Water Coordinator, who suggested at the end of the meeting that he would like to visit the farmer-managed re-greening /new agroforestry parklands in the Sahel and he felt that was presented should be brought to the attention of the USAID Administrator.

A meeting at the Global Environment Facility with senior environmental specialist Mohamed Bakarr to discuss where re-greening/agroforestry can be presented in the upcoming Conference of Parties of the UN Convention to Combat Desertification in October in South Korea.

During the different presentations in Washington, it was emphasized that resource users protect and manage natural regeneration for many reasons. One is that it helps them build more productive and more drought resilient farming systems. To farmers it is the lowest cost way of intensifying agriculture. One of the main benefits to women is that it reduces the time required for collection of firewood as they can now prune on-farm trees rather than walk many miles to search for some shrubs.

“The man who stopped the desert”

Since the beginning of 2011 this documentary about the life, innovations and impacts of farmer innovator Yacouba Sawadogo has won 4 awards:

Mark Dodd (www.1080films.co.uk), who made the documentary, is now developing a scenario for a more general documentary about the multiple impacts of re-greening/agroforestry.

The 4 minute clip below explains the tools that the Web Alliance for Re-greening Africa is now developing to increase access of resource users to relevant information about re-greening and its impacts. It is essentially about linking mobile phones and rural radios. The tool has already been tested in Mali and a wider roll out will be tried in Mali in November. If it works then it can be used at a much larger scale to spread info about farmer-managed natural regeneration as well as on the natural regeneration of degraded forests.

Given the ambitious re-greening/forest landscape restoration initiatives now emerging, the strategic importance of this work by the Network Institute of VU University Amsterdam and the Web Foundation of Sir Tim Berners-Lee is increasing.

An article in the September issue of UNEP’s flagship publication….One Planet. This issue of One Planet was published just before a special session on September 20 of the UN General Assembly about desertification.

It should also be mentioned here that all African Ministers of Agriculture met in South Africa in the week of September 12….about Climate Smart Agriculture. The document specifically prepared for this meeting contains a case study about re-greening in Niger and its cover page shows a Faidherbia albida parkland in Tanzania with a beautiful stand of crops under the trees. The message is increasingly getting across that agroforestry is a vital pillar in improving food security, increasing drought resilience of production systems and reducing rural poverty.

Tony Rinaudo of World Vision Australia and his partners

Tony is relentlessly promoting farmer managed natural regeneration and he is organizing training workshops from Ethiopia to Ghana and from Sumba (Indonesia) and East Timor to Senegal. More attention will be paid to his work in the next updates. Below some pictures of a training workshop in Tigray (Ethiopia) earlier this year, which included practical as well as theoretical training.