Advocacy and networking on regreening 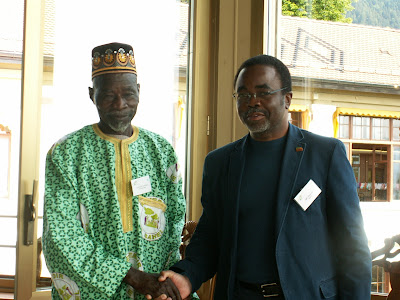 On the right Luc Gnacadja, Executive Secretary of the UN Convention to Combat Desertification and on the left Yacouba Sawadogo, farmer innovator from Burkina Faso, who is the key person in the documentary “The man who stopped the desert”. They met in Caux (Switzerland) on July 15 during a full day special event on “restoring Earth’s degraded land reversing man-made deserts, reviving agricultural land”

Special event at the 4th Caux Forum on Human Security in Switzerland.
On July 15 about 250 participants from 50 countries attended a full day special event during the Caux Forum on Human Security in Switzerland. Clare Short, former UK Secretary of State for International Cooperation introduced the day and Luc Gnacadja, Executive Secretary of the UN Convention to Combat Desertification made a challenging presentation about reversing man-made deserts using as title: “Soil, so much depends on so little”. The presentation can be found at www.unccd.int under a section about the Caux Forum.

Since 1980 Yacouba Sawadogo improved traditional planting pits or zaï, a technique that has since then been used to rehabilitate tens of thousands of hectares of strongly degraded land in the Sahel. He is the key person in the multiple award winning documentary “The man who stopped the desert”. The French and the English version of this documentary were shown simultaneously and deeply impressed and moved all participants. 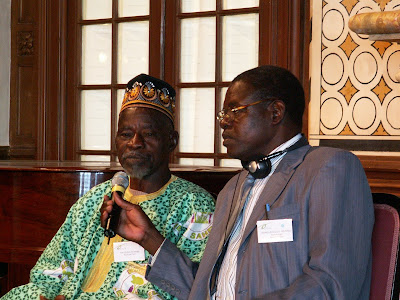 The question and answer session at the Caux Forum after the documentary was shown. On the left Yacouba Sawadogo and on the right Mathieu Ouedraogo, coordinator of the re-greening initiative in Burkina Faso.


Among the participants were not only farmers, development specialists, human rights lawyers and activists, energy specialists, documentary makers, diplomats and politicians, but also two distinguished journalists: Mr. Prem Shankar Jha from India and Mr. Geoffrey Lean from the United Kingdom. Mr. Jha is a prolific author and continues to publish frequently in the Hindustan Times and other journals. Mr. Geoffrey Lean is the UK’s most senior environmental journalist. During the Caux Forum he produced an article, which was published in the business section of the Daily Telegraph on Saturday 16 July entitled: “The earth can’t afford to lose any more ground”. This article mentions re-greening in Niger. 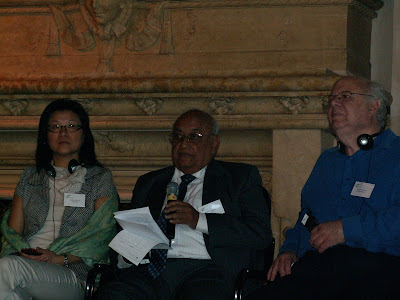 On the left Mrs. Chau Duncan, Australia’s Trade Commissioner for Clean Energy and Environment. In the middle Mr. Prem Shankar Jha and on the right Mr. Geoffrey Lean.

During an informal meeting of a small group of environmental specialists, Mr. Jha described how millions of hectares of degraded areas in India still have underground root systems which offer possibilities for natural regeneration. His analysis showed striking similarities with the analysis by Tony Rinaudo of World Vision Australia for parts of Niger where underground root systems were an important source of re-greening.

Participation in this special event generated many new contacts as well as invitations to expand ARI to Tchad, Rwanda, Uganda and other countries. As a starter all new contacts will receive the ARI updates.

Advocacy in Mali
From 19 – 22 June, a small delegation of representatives of the Ministry of Agriculture, farmer organisations and NGOs, led by the Vice President of the “Haut Conseil des Collectivités Locales” visited six field sites to get first hand information from farmers about their experience with the protection and management of natural regeneration. They were impressed by the transformation that has occurred and by the multiple impacts generated by the increasing number of on-farm trees. The delegation was accompanied by radio, TV and press. 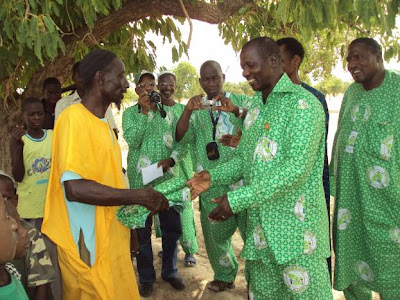 The Vice-President of Mali’s « Haut Conseil des Collectivités Locales « presents a gift to Mr. Zié Diakité, a farmer from the village of Diénina, who distinguished himself in the 2010 agroforestry competition. On the right, Mr. Mamadou Diakite of SahelECO and in the middle (with camera) Mr. Mamadou Lamine Coulibaly of the national coordinating body of Mali’s farmer organisations (CNOP)

Ethiopia
Interesting news from Ethiopia is that Prime Minister Meles Zenawi seems to have stated recently that the re-greening of Ethiopia will form one of the three key pillars for Ethiopia to achieve a Green Economy. PM Meles Zenawi represented Africa during the Climate Change Conference in Copenhagen in December 2009. It is highly significant that he specifically mentions re-greening as a key pillar. We hope to provide more details in one of the next updates.

Building drought resilient production systems in the Horn of Africa: a key challenge

All media are now reporting on an almost daily basis about the drought and famine in Somalia and parts of Ethiopia, Kenya and Uganda. The articles highlight human suffering on an increasing scale. The costs of food aid are estimated to be more than one billion euro. Slowly but surely awareness is emerging that it may cost less to develop more drought resilient production systems at scale than to cope with famine and its impacts.

The Government of Kenya is taking steps to implement a policy that requires all farmers in Kenya to grow trees on ten percent of their cultivated land, which may be easier in Kenya’s highlands than in its drylands. A major challenge will be to improve range management to make livestock systems more drought resilient and to reduce conflicts between herders as well as between herders and farmers.

The IFAD-funded project on “Support to Re-greening in the Sahel”
As mentioned in the previous update, the World Agroforestry Centre (ICRAF) organized a workshop in Bamako early June about the methodology of a study on the economics of agroforestry in the Sahel. Filming 12 cases of successes in adaptation to climate change has begun and contracts are established with partners in four Sahel countries: Senegal, Mali, Burkina Faso and Niger, who will be responsible for developing national policy dialogues around re-greening.

Some next steps
1. A visit to Kenya is planned for early September to present the IFAD-funded project “Support to Re-greening in the Sahel” and to explore possibilities for developing a re-greening initiative in Kenya.

2. As soon as possible, but certainly before the end of 2011, a discussion note will be produced about the development of national strategies for re-greening. The target group for this note will be national and international policymakers. It should give them a set of practical steps to quickly expand the scale of re-greening in drylands and sub-humid regions, which will help build more productive and drought-resilient farming systems.

The next update will appear by the end of September … unless there is a reason to share information earlier.