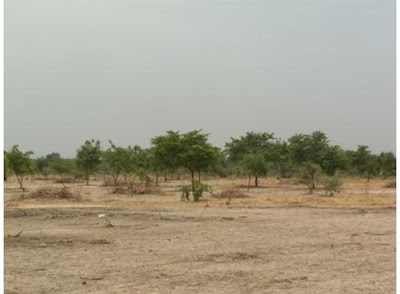 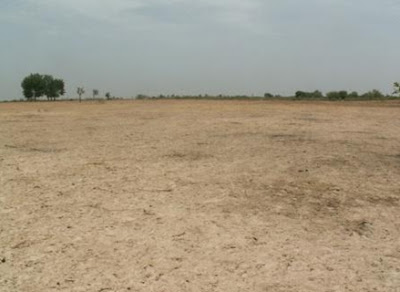 This field is adjacent to the one above; most cultivated land in the Saloum region of Senegal is barren or has low on-farm tree densities (see point 2)

“The management, conservation and sustainable development of dry forests are central to combating desertification. The ongoing greening of the Sahel and other success stories around the world show that degraded lands can be reclaimed by agroforestry and other sustainable practices. We need to scale up these interventions and disseminate their results widely”.

This is exactly what African Re-greening Initiatives tries to do and the message of Secretary General Ban Ki-moon encourages all involved to persevere and expand activities.

2. Farmer-managed re-greening in the Kaffrine area (Senegal)
The Kaffrine area is part of Senegal’s Saloum region (Southeast of Dakar), which has low on-farm tree densities. This is the heritage of policies in the 1960s and 1970s to expand mechanized cultivation in Senegal’s peanut basin. The removal of trees and their stumps was subsidized in those days in order to create large treeless fields. In combination with cutting trees for charcoal production, this caused a large-scale degradation of vegetation. World Vision Senegal began doing so in 2008. The number of species protected and managed by farmers is limited. The main species concern Piliostigma reticulatum (for fodder and improvement of soil fertility) and Guiera senegalensis (firewood and fodder).


Every year World Vision Senegal sends a delegation of 22 farmers and staff to Niger to look at and learn from farmer-managed natural regeneration in that country. During the field visit it became quite obvious that farmers who participated in those study visits behave differently. They don’t burn Guiera senegalensis to enrich the soils, but they prune it and use the leaves as mulch, which attracts termites and improves soil structure (see picture below). 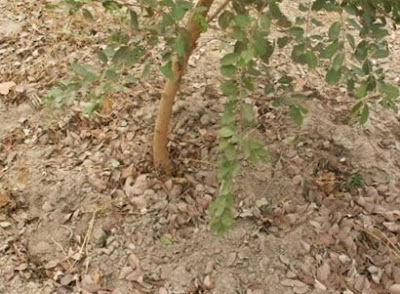 The scale of on-farm natural regeneration, which is still in its early stages, now concerns about 30,000 ha, but this includes some areas where densities are still low. However, some key conditions are united for rapid expansion of agroforestry in this region. These include high population densities, sandy soils, low on-farm tree densities and fairly good rainfall (about 700 mm) compared to areas in Niger and Mali where farmer-managed re-greening has already taken place on a large scale (about 500 mm).

The indications are that in 2010, cereal yields were significantly higher on cultivated land with young agroforestry systems than on fields without. This needs to be confirmed by longer-term monitioring.

3. Agroforestry systems in Europe
It can be argued that agroforestry represents the agriculture of the future as it produces “multiple wins”: enhancing food security, adapting to climate change, improving drought resilience, sequestering carbon, increasing biodiversity, etc.


It is interesting to note that agoforestry systems are also found in Europe. For instance in Spain and Portugal millions of hectares are covered by centuries old agroforestry systems, which continue to be maintained. They are largely based on two species of oak, including cork oak, but also on olive trees. Tree densities are often 40 trees per ha or more and under these trees farmers grow cereals or fodder grass. Extensive livestock grazing, which produces high quality meat, is part of this production system. The two photos below show a valley and hills in Spain’s Extremadura region with dense agroforestry and cattle grazing under the trees,where they benefit from fodder and from shade in this warm climate. 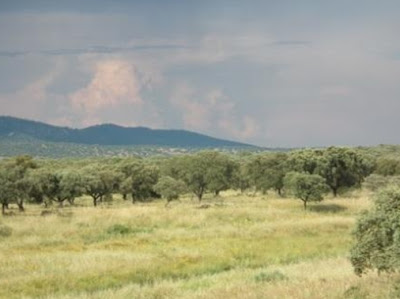 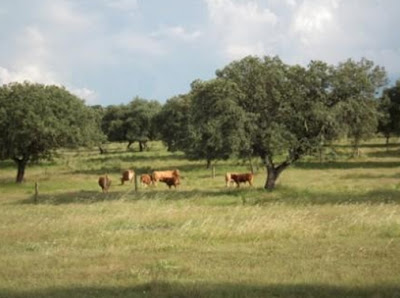 4. World Agroforestry Center workshop in Bamako
From June 6 – 8, the World Agroforestry Center (ICRAF) organized a workshop in Bamako about the research methodologies that will be used to study the socioeconomic impacts as well as the costs and benefits of agroforestry systems in the Sahel. This is one of the three components of an IFAD grant to support re-greening in the Sahel. The workshop also identified research partners and made a first selection of potential research sites.

5. First Africa Drylands Week in Dakar
From June 13 – 17, the first Africa Drylands Week was held in Dakar. This Drylands Week (about 150 participants) was organized by a wide range of organizations: FAO,the Great Green Wall, the Earth Institute of Columbia University, etc. Many presentations were made on a wide range of themes relevant to dryland development. One aspect that transpired during the presentations and discussions is that the interest in farmer-managed re-greening and evergreen agriculture is increasing strongly. This is partly due to the fact that conventional tree planting has often produced disappointing results. A next update will provide a link to the report as soon as it becomes available.

6. Preparation of field visit by a delegation from Nigeria to Niger
During the workshop on agroforestry in Niger held in January 2011, the idea emerged to organize a field visit by a delegation from (Northern) Nigeria, which has in quite a few places low on-farm tree densities, to the new dense agroforestry parkland of Southern Niger. The partners in Niger are willing to organize a workshop and a field visit. Dr. Chinwe Ifejika Speranza, a Nigerian climate scientist, is a driving force behind this initiative. She has contacted the Heinrich Böll Stftung in Germany, which is willing to fund the cost of the Nigerian delegation. This workshop is likely to take place at the end of 2011.

Our hope is that it will lead to a re-greening initiative in parts of Northern Nigeria, which is urgent for many reasons.

7. Advocacy
Many opportunities emerged during the last two months to present farmer-managed re-greening in Africa’s drylands and its multiple impacts. These included presentations at the First Africa Drylands Workshop (June 13), at USAID Dakar (June 16) on “how can USAID contribute to feed the future in Africa’s drylands?, at the occasion of a workshop of the Dutch Knowledge Network “ Sustainability, Climate and Energy” (June 23) on Adaptation to Climate Change in Africa’s Drylands: from research to action; at the Sustainable Foods Summit in Amsterdam (June 23) on Sustainable Innovations and Climate Change in Africa’s Drylands.

8. Expansion of African Re-greening Initiatives: how can you contribute?Both in Burkina Faso and in Mali, the re-greening partners are receiving requests to expand their activities to other regions or provinces. At present the partners in Burkina Faso are working in 6 provinces and their plans are to expand to 10 provinces. The partners in Mali receive similar requests for expansion. They just organized a so-called caravane with national decision makers to the large-scale re-greening in the Seno Plains.

The partners in Niger have just organized study visits for farmers in the Dogon Doutchi region to Maradi.

Besides expansion within the existing countries, possibilities to expand ARI to Kenya will be explored. More about this as well as about Niger and Ethiopia in the next update.

9. Web Alliance for Re-greening in Africa (W4RA)
W4RA is developing and testing its tools. Below you’ll find the link to a short trailer about their field visit in January 2011.


Female lead farmer from Kaffrine (Senegal) who went to Niger Thousands of projects have come through here but this SFLEI ( Senegal Food and Livelihood Enhancement Initiative) there is no comparison, if we are the judges. We have nothing but our environment. Since we started working with Farmer Managed Natural Regeneration we have already started seeing the benefits that we have not seen with any other project. The type of benefits we see pushes me sometimes to leave my home and just walk through my field to appreciate the trees and environment. When things get to where they need to be, we will see more yields and the path will be clear.

The next update will be produced around end July.