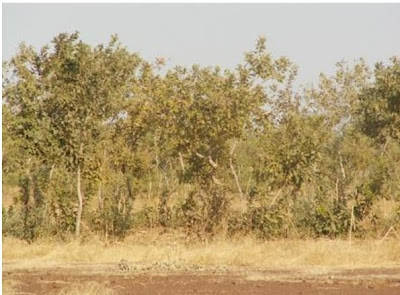 This update begins with a story about the scale of re-greening on Mali’s Seno Plains between the escarpment of the Dogon Plateau and the border with Burkina Faso. This picture shows high tree densities and older trees close to the escarpment. When we look beyond a band with low tree density, a sea of trees can be seen in the distance stretching across the plains. Gray Tappan of USGS-EROS has now uncovered the scale of re-greening.

How did this agroforestry parkland emerge?Just a few remarks and observations:

a. SahelECO and its predecessor SOS Sahel UK have promoted farmer-managed re-greening since the middle of the 1990s.

b. The radio station of Bankass was used to spread the information about the new forestry law of 1995.

c. An increase in rainfall since the middle of the 1990s probably supported the process of regeneration, but as we know from Niger….human management is a more decisive factor in re-greening than rainfall. The process of re-greening in Niger began a decade before the increase in average rainfall and Northern Nigeria has much lower tree densities than Southern Niger despite higher rainfall. 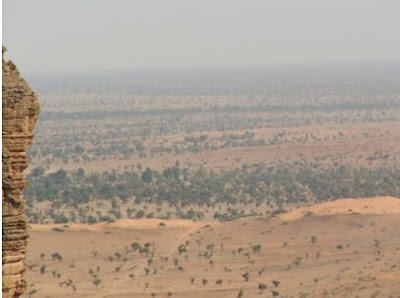 d. Traditional institutions responsible for the management of trees (Barahogon and others) have been successfully revived in this region.

e. SahelECO staff report that about 5% of the trees on the Seno Plains are older than 15 – 20 years and the large bulk of trees is younger. 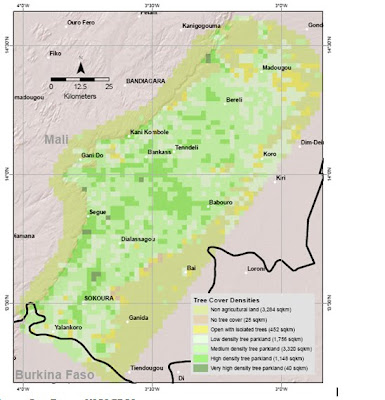 f. Gray Tappan notes that (1) one finds low densities of on-farm trees on another 175,000 ha; (2) the Seno Plains had high tree densities in the 1960s….they probably dwindled in the 1960s and 1970s and this U curve now shows an upward trend; (3) on the Plateau Dogon itself…interesting examples of high tree densities are found….but this was not part of the analysis. 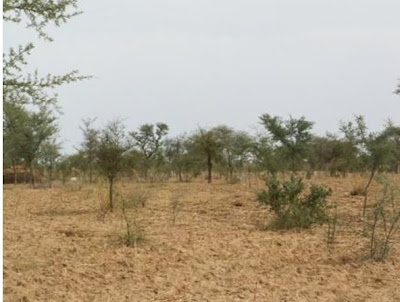 On the Dogon Plateau one finds cultivated fields with high densities of young Combretum not included in the data for the Seno Plains. It is not only good firewood, but women also gather the leaves and use it as manure in irrigated gardens.

Conclusion: a major agro-environmental transformation has occurred during the last 15 – 20 years on the Seno Plains…its scale was unknown until now….Gray Tappan used high resolution satellite images to uncover the scale…more research needs to be done about the history, evolution and dynamics of this young agroforestry parkland. SahelECO and its partners continue to promote farmer-managed re-greening in this region and elsewhere in Mali. Where a set of conditions are united…it is possible to induce farmers to invest in on-farm trees and transform landscapes and production systems at scale.

There is more good news to report.

International Fund for Agricultural Development (IFAD)
The IFAD project about “support to re-greening in the Sahel” has now been signed by IFAD and by VU University Amsterdam and activities will now be started up (see ARI update 2011 no. ).

World Agroforestry Centre (ICRAF)
Dr. Dennis Garrity, DG of the World Agroforestry Centre, visited Amsterdam on May 1 and 2. Points on the agenda included: closer cooperation between ICRAF’s Evergreen Agriculture Initiative and African Re-greening Initiatives, which s likely to take shape in 2011; building a movement around Evergreen Agriculture and Farmer-Managed Re-greening; joint advocacy and research on impacts of re-greening.

Dennis Garrity also mentioned that Evergreen Agriculture rapdly gets a higher profile in India. Prof. M.S. Swaminathan, the highly-respected father of the Green Revolution in India, published a book in 2010 “ From Green to Evergreen Revolution”. This book was officially launched by India’s PM. Under a new Evergreen Agriculture Initiative India plans to plant large numbers of “fertilizer trees”. More about this in future updates. It is quite likely that the protection and management of natural regeneration also has a potential for India.

Ethiopia
The Environmental Protection Agency seems interested in funding a project to protect and expand “church forests” or “belief system forests”, which are centuries old remnants of forests. They show what is called the climax vegetation. These small forests, which have a high biodiversity, risk to disappear due to gradual encroachment by farmers. The amount of funding is not yet known.

Media attention
The Voice of America recently had an excellent story about farmer-managed re-greening, which integrates different messages.

Upcoming events
From 6 – 8 June a workshop will be held in Bamako to discuss the methodology for the ICRAF study about the socioeconomic impact in the Sahel.

From 10 – 16 June, the First African Drylands Week will be held in Dakar. It is a contribution to the International Year of the Forests. One of its objectives is to exploit the knowledge developed in 3 decades of combating desertification and implementing sustainable land management to adapt to climate change and ensure sustainable development.

On April 23, the French TV station France 5 showed a 50 minute french version of the documentary “The man who stopped the desert”. It will be shown again on May 9.