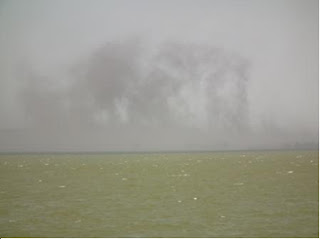 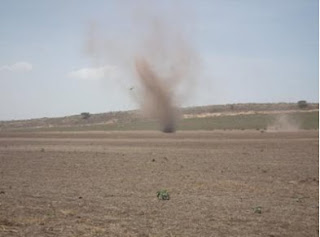 The first picture shows an example of large-scale mechanized commercial
agriculture in Hawassa in Ethiopia’s Rift valley. In the distance on the right
hand side of the picture a tractor is ploughing the bare land. Two hours later
strong gusts of wind blew tons of topsoil from this ploughed field over lake
Hawassa (February 24, 2011). The owner of the land will have to apply
tons of fertilizers to compensate for the loss of fertile topsoil. No on-farm trees
to protect the land against wind and sun. It’s a clear example of unsustainable
agriculture.

RE-GREENING AND AFRICAN FOOD SECURITY
During my visit to Mali in the first week of April, I was told that the demographic growth rates for Mali had been revised upwards on the basis of a recent study. The assumption was that the growth rate was 2.2%, but the study showed that it is 3.6%. This means that Mali’s population will double in 20 years. Niger has a similar growth rate. The fact is that the population of many African countries will double in the next 20 to 25 years.

At the same time rainfall is becoming more irregular and soil fertility is depleting in many areas because traditional soil fertility restoration techniques (fallow) can no longer be used. Fertilizer prices are soaring, world market prices for cereals are increasing, food security stocks are declining. The macro picture for the next 20 years is quite gloomy. It’s obvious that major action is urgently required to sustainably intensify African agriculture .

Experience shows that farmers who have increased the number of on-farm (and sometimes off-farm) trees have not only improved household food security, but also adapted to climate change, maintained or improved soil fertility through nitrogen fixation and increased soil organic matter content, sequestered carbon in trees and soils, not only produced more food, but also more fodder and fuel . Agroforestry is not a silver bullet, other action is also required , but it is to all farmers the lowest cost pathway to sustainably intensify agriculture and the recurrent costs to governments and donor agencies are zero.

Experience in Niger shows that it is possible to build new agroforestry systems at scale. The 5 million ha of re-greened land produces more food, fodder, fuel and many other benefits. It is estimated that the impacts of re-greening feeds an additional 2.5 million people .

Many smaller and bigger examples in agriculture and in agroforestry in and outside the Sahel show that it is possible to expand the scale of existing successes . African Re-greening Initiatives has developed a strategy for building on existing successes, which it is trying to implement. The first indications are promising.

Although the macro picture is gloomy and we seem to be heading into what Roland Bunch calls “a perfect storm” , it is not a fatality, but we can’t afford to delay substantive action, because climate change is already aggravating the problem .

Re-greening in Burkina Faso
During its first year the re-greening initiative involved 106 villages in 6 provinces. What we see happening in the second year is a ripple effect. Neighbouring villages request to be also involved. For instance, in Gnagna Province 6 villages have joined and in Sanmatenga province the number of villages increased from 12 to 22. The total number of villages involved now stands at 125. In addition to this there is growing pressure to expand to other provinces. After the official launch of the re-greening initiative on January 25, 2011, two provinces have officially requested to also be included.

During meetings end March with key partners (Reseau MARP, Tree Aid, World Neighbours and representatives from local NGOs who operate as extension agents for re-greening at provincial level), it was decided to:

1. now start a process of monitoring and evaluation and develop tools for self-monitoring and self-evaluation by resource users and a small team has already been created to undertake this work;

2. intensify exchange and study visits by farmers and herders before the rainy season.

The exchange and study visits will concentrate on villages within the same “commune” in order to maximize the number of participants and reduce costs. Nevertheless, it was deemed important urgent to organize a visit by farmers and herders from Soum province (the region around Dori) to the Seno plains in Mali where significant re-greening has occurred…and farmers from the Seno Plains could be invited to train farmers and herders in Soum province.

The launch of “The man who stopped the desert” in Burkina Faso.

On March 27 the documentary about the life and work of Yacouba Savadogo was shown in his village. About 500 villagers joined the event. The next evening it was shown in the open air cinema of Ouahigouya, the regional capital. Even more people attended that event. After the showing Yacouba was almost overrun by those who wanted to congratulate him.

The link below is a 10 minute film which shows the events in the village and in the cinema.

Re-greening in Mali
During a short visit to the Seno Plains around Bankass on March 29 my impression was that the scale of on-farm re-greening in this region is under-estimated. The numbers used tend be around 15,000 ha, but it is obviously much more. Gray Tappan of the US Geological Survey is now using satellite images to get to grips with the scale. The first results will be known within a few weeks. The pictures on the next page give some impression about the diversity of situations in the area around Bankass. 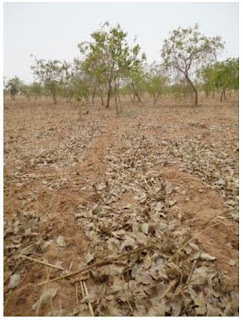 This field close to Endé has a young high-density stand of Combretum Glutinosum, which provides high quality firewood. Densities are up to 270 trees/ha. Farmers prune the trees in June in such a way that competition with crops is minimized. The trees also produce several tons of litter/ha as can be seen on this picture. The picture below shows a stand of high-density young Faidherbia albida. 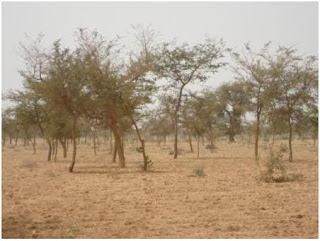 Like in Burkina Faso, a ripple effect is taking place. In all areas that the re-greening initiative is working, new villages want to join. The initiative is now active in the regions of Mopti, Tominian and Segou and will soon expand to Koulikoro. In the Mopti region 300 farmers participated in a re-greening competition and the fields of all these farmers were visited and demarcated by a committee of composed of representatives of the technical services (agriculture, forestry…..).

From the point of view of the promotion of farmer-managed re-greening, several positive, but also one negative development can be reported in Mali. The negative development is that Mali adopted a new forestry law in 2010, which does not mention agroforestry systems and natural regeneration. The new law is about repression and not about education. It is about deterring farmers to invest in on-farm trees rather than about inducing them to invest. The authorities recently decided to temporarily put the law on hold….as some protests against it turned violent. It is not unlikely that the new law will be adapted.

A very positive development is that the new Strategic Investment Plan for Sustainable Land Management in Mali specifically mentions farmer-managed re-greening as a high priority. This certainly offers opportunities for developing a national strategy for re-greening and for increased investments in agroforestry.

Tony Rinaudo and Rob Francis of World Vision Australia were in Tigray in March as a follow-up to a training workshop on farmer managed natural regeneration by Tony 8 months ago. Tony’s report mentions that the Bureau of Agriculture has decided to institutionalize famer-managed natural regeneration and integrate it into their normal programming. This is highly relevant as the Bureau is the driving force behind the large-scale re-greening in Tigray. This may ultimately lead to the sustainable management and exploitation of natural regeneration as well as planted trees in what is called enclosures (over one million hectares). If you want more info, please contact: tony.rinaudo@worldvision.com.au

The Web Alliance for Re-greening in Africa (W4RA)

See previous update. The website for African Re-greening Initiatives is still under construction. A number of colleagues of VU University, World Wide Web Foundation and SahelECO will present a paper at the Web Science Conference in Koblenz (Germany) in June.

Below you see the picture of Adama Kindo taken on March 28. He recently returned from Ivory Coast to the village of Bogoya (Burkina Faso). Adama lost an arm in a road accident in Ivory Coast, but using his left arm he just dug zaï on about a hectare and filled them with compost. Adama is determined to develop a diverse agroforestry system just as his cousin Ousséni Kindo has done since 1985 on an adjacent field of 4.5 ha. Ousséni Kindo and his family have been food secure since 1985. 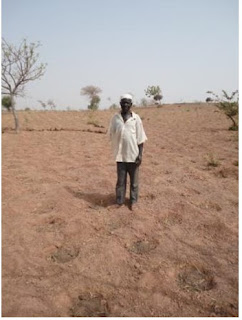 Below you’ll find a link to an article in major German newspaper “Welt am Sonntag”, which is about the Great Green Wall, but it also pays attention to farmer managed re-greening in Senegal and in Niger.

In about two months, the New Yorker ( a US weekly with 1.2 million subscribers) will have a substantial article about re-greening. We’ll come back to it when published.

On May 2, Dr. Dennis Garrity, DG of the World Agroforestry Centre (ICRAF) in Nairobi, will visit Amsterdam. That will be a new opportunity to discuss how to build linkages between ICRAF’s Evergreen Agriculture initiative and African Re-greening Initiatives.

Next update
The next update will be produced around mid May.