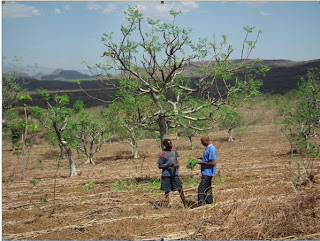 An agroforest of Moringa stenotepala close to Konso, Ethiopia (February 28, 2011)

This second update of African re-greening Initiatives in 2011 begins with a brief overview of some of the re-greening activities by World Vision Australia. It shows how farmer-managed natural regeneration (FMNR) is spreading to other countries and regions. Within World Vision Australia re-greening has at least two formidable champions: Tony Rinaudo (tony.rinaudo@worldvision.com.au) and Peter Weston (Peter.Weston@worldvision.com.au) In the mid-1980s Tony catalyzed the process of re-greening in Niger’s Maradi Region and he now travels to Ghana, Niger, Ethiopia, Cambodia and many other countries to train farmers and technicians in how to do it…If you want to know how farmer managed natural regeneration works in practice….then just google on “you tube Tony Rinaudo FMNR”
http://www.youtube.com/watch?v=E9DpptI4QGY
Peter Weston is program coordinator for Tchad, Senegal as well as for West Africa regional initiatives. He recently presented FMNR to an Australian Parliamentary Committee that advises and oversees Australia’s foreign policy.
This brief overview of World Vision’s re-greening activities is followed by information about several recent activities and developments.
Some examples of World Vision Australia supported re-greening
Senegal

World Vision Senegal is currently conducting two, well resourced sister-projects in 10 districts around Kaffrine region, which is in the Senegal’s densely populated peanut basin. These followed on from a number of small pilot projects that built a body of experience in engaging farmers in the adoption of new agroforestry techniques. The projects combine promotion of FMNR, jatropha hedges and fruit trees with short-term food production 'accompaniments' and food for work programs. As a result of the previous lessons learned, interest and adoption of farmer-managed natural regeneration in particular and field hedging is spreading rapidly throughout the region. Within two years farmers have protected and managed FMNR on about 25,000 ha and they have hedged 612 ha with jatropha. A great emphasis has been placed on facilitating discussions about environmental sustainability with wider community groups beyond the farmer household heads, and mediating land user rights within and between communities and the Forestry Service to eliminate tree poaching.

Niger
World Vision Niger is long acquainted with FMNR due to its working relationship with agricultural missionary organisation: Serving-In-Mission (SIM). This small project is one addition to a long history of NRM projects for World Vision Niger. This small project intends to work with 5 districts in Zinder and Tahoua regions. The current project that commenced activities late in 2009 intends to complement existing FMNR activities with other agroforestry activities, namely to support local demand for moringa oleifera and ziziphus mauritiana, and to promote SIM's technique of 'Farmer-Managed Agroforestry System' (FMAFS) that delimits farmer fields with acacia colei to act as wind barriers, to fix nitrogen and provide a protein food supplement. This project is drawing on media promotion via radio emissions and the participatory development of agroforesty manuals in French, Hausa and Kanuri. 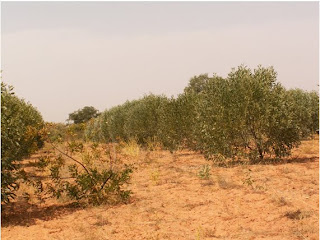 A separate World Vision research project in Niger recently studied the potential market demand and value chain linkages for acacia colei seeds. A.colei is extremely dryland tolerant and its seeds are high in protein and micronutrients. The project found that market demand is still localised around areas already having a history of growing and consuming the seeds. Potential exists for wider market acceptance but would primarily be via pre-processed foods such as weaning foods, snack foods and the like, rather than unprocessed seeds. Increased acacia colei production is desirable from both a soil restoration and human nutrition perspective. But further adoption is constrained by the lack of market promotion presently, despite many market opportunities being identified.

Chad
Recently, World Vision Chad completed a pilot project that attempted to establish model farmers in 12 districts experiencing deteriorating forest cover and soil quality across Southern Chad. The project promoted FMNR, SIM's Farmer-Managed Agroforestry System (FMAFS), as well as well-known dryland fruit trees such as mangoes. Whilst the project did gain some local practitioner advocates, it also found that spreading such a project across 12 districts with limited staffing and budget was overly optimistic, and unable to gain any real traction in most locations. Consequently, a recently commenced follow-on project is intensifying the initiative in just two locations: one near Guelendeng and one near Doba.

Ghana
In 2010 a farmer delegation from Ghana visited re-greening in Burkina Faso and Mali. Building on the lessons from the projects in francophone West Africa, World Vision Ghana has commenced a FMNR project in the Upper East Region of Northern Ghana. Though only recently commenced, early indications are that farmers and authorities are enthusiastic about applying the technique, and appreciate the opportunity it presents to recover some of their lost local tree species and soil deficits.

Mauritania
World Vision Mauritania has started a small project in two districts of Brakna region that aims to work with 100 households to promote NRM techniques into household farming systems. It aims to reduce their climatic vulnerability by halting agricultural land degradation and biodiversity loss, and ultimately, increase household nutrition and incomes. The main techniques being shared are FMNR, hedging fields, and multi-purpose perennials.

Mali
World Vision Mali has started a small project working with 20 village communities around Kolokani. The project is trialling the use of various multipurpose agroforestry species including acacia colei, moringa oleifera, jatropha curcus, ziziphus mauritiana and citrus. The project also promotes FMNR in crop fields, and intends to work with communities and the Water and Forestry Service to review laws and practices that restrict the application of agroforestry.

The focus of this brief overview is on what World Vision does across the Sahel to promote FMNR, but World Vision is also actively promoting re-greening in Ethiopia, Tanzania and several other countries. In Ethiopia the Humbo project is the first project in Ethiopia that is financed by the Carbon Development Mechanism. The Humbo project is about the promotion of natural regeneration of degraded forests (3,000 ha). If you google on Humbo Assisted Natural Regeneration you will find all info. World Vision partners from Tanzania visited Humbo, got inspired and began protecting natural regeneration of degraded forests on 18,000 ha.
More about World Vision’s activities in future updates.

Re-greening in Mali and Burkina FasoIn Mali many meetings were held locally by all partners at the end last year (in Djenné, Koro, Bandiagara, Mopti) to discuss the results of farmer competitions for best performance in the protection and management of natural regeneration and to plan activities for 2011. Farmers, NGO partners and elected officials participated in those meetings. Looking at the reports they all proposed expanding activities to other areas.
The partners in Burkina Faso met mid-March for stocktaking and planning. More details about the activities in both countries in the next update after my visit to both countries (March 26 – April 8).

Re-greening in NigerAs mentioned in the first update, an international workshop was organized in Niamey in January 2011. It was co-organized by the World Agroforestry Centre and African Forest Forum. A key objective was to develop a national strategy for re-greening in Niger. The 100+ participants had lively debates and those who visited re-greening in Maradi and Zinder before the workshop began, were impressed by the scale of re-greening. A report will soon be available.
One immediate spinoff of this workshop was that participants from Nigeria wanted to know more about Niger’s re-greening and it is likely that a delegation from Nigeria will visit Southern Niger in 2011 to draw lessons from Niger’s experience.

Re-greening in EthiopiaAs mentioned in update no. 1, the mobilisation of funding for the Ethiopia Re-greening Initiative is a key priority in 2011. A visit to Southern Ethiopia confirmed the importance of agroforestry. Just one example. Travelling the 90 km from Arba Minch to Konso, the importance of Moringa Stenotepala becomes evident and the closer one gets to densely populated Konso with its traditional terraces, the higher the densities of Moringa. Many families depend on this tree for their survival (household consumption and cash income from sale). The fresh leaves are sold in the market for about 4 Birr/kilo (0.18 euro/kilo). Developing a value chain around Moringa offers perspectives.


The Great Green Wall through the Sahara and the Sahel (GGW)During a meeting in Bonn in the second half of February donor agencies pledged 3 billion $ for the GGW. That’s a major achievement. However, it should be noticed that experience shows that there’s a discrepancy between pledges and disbursements. Farmer-managed re-greening is quickly becoming part of the GGW approach, which is a positive development.

The International Fund for Agricultural Development (IFAD)See update 2011 no.1. IFAD’s legal department is expected to soon sign the project.

“The man who stopped the desert”The documentary won the special jury prize of the International Forest Film festival in the USA (www.1080films.co.uk). On March 28, Mark Dodd, who made the documentary about the life of Yacouba Sawadogo, his innovations and impact, will be shown in Ouahigouya (Burkina Faso) to all who participated in the making of the documentary as well as to city officials.

The Web Alliance for Re-greening in AfricaIn January/February, researchers from VU University Amsterdam, together with partners from World Wide Web Foundation and Sahel Eco – Mali, travelled sixteen days through the Senegal, Mali, Burkina Faso and North Ghana, exploring local information needs in remote rural areas. The outcomes will be used for development of innovative web services based on voice technologies. 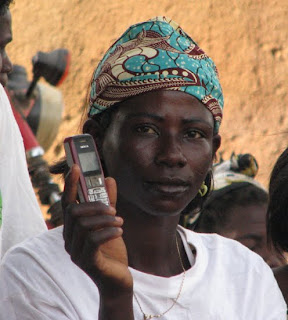 Meetings were held with farmers and herders, local radio stations were visited and meetings were held with farmer organisations. Community radio and mobile telephone, apart from word of mouth, are the only sources of information in these remote villages, devoid of electricity, TV or Internet. Radio programs are created in local studios, and continuously broadcasted in various languages. Radio listeners often travel from a distant village, and bring a handwritten message to have it broadcasted for their friends and family. They are ready to pay the radio a fee of 500 francs CFA (less then one euro), a considerable amount in this region. Is the desire to Twitter a universal human trait?

Farmers, herders and radio staff shared their thoughts on innovative voice-based information services. It led to a vivid discussion and many original ideas emerged for voice-based services. One farmer suggested some sort of voice "yellow pages" service, which can provide contact details of an expert who will give him tips on how to grow shea trees.

Voice-based services may bring new opportunities for people to exchange information about re-greening activities, about prices on the local market, health or legal issues, music and entertainment, local news or anything one can imagine…!!

The next update will be produced around mid April.