In 2010 food shortages will affect more than 3 million people in Niger (in particular in the Regions of Tahoua, Maradi, Zinder and Diffa). Reason: the 2009 rains arrived late, stopped early and were erratic. People and livestock will depend more heavily on trees and on food aid. A national re-greening program would help increase resilience to drought.

ARI is promoting farmer-managed natural regeneration to support farmers to adapt to climate change, improve household food security and reduce rural poverty. It wants to do so by scaling up existing smaller and bigger successes. It is increasingly urgent to do so, because many more land users in Africa’s drylands risk “falling off the edge” . Business as usual is no longer an option.

Some comforting news. Several studies indicate that investing in ecosystem restoration increases production and helps keep people on the land. The village of Ranawa on the northern part of the Central Plateau of Burkina Faso is an interesting example. Due to recurrent drought, land degradation and food shortages, it lost 25% of its population between 1975 and 1985. Since land rehabilitation activities (=ecosystem restoration) began in 1984/85, not a single family has left the village and several families returned from the southwest where they had tried to settle. Between 1985 and 1996 its population doubled. This may be an extreme case, but there is some evidence that the demographic dynamics of villages which invest in their natural resources are different from those in which little or no investments are made.

Some highlights since early March

1. Another visit to the International Fund for Agricultural Development (IFAD)

The main reason for re-visiting Rome on March 25 and 26, shortly after the panel at IFAD’s Governing Council, was to participate in a meeting about scaling up successes. At the same time the organizers at IFAD created opportunities for presenting results of the Sahel study as well as information about African Re-greening Initiatives and how we try to scale up existing successes.
I am working in development cooperation since 1977 and have made quite a few presentations at donor agencies…in particular in the last few years. Reactions to the re-greening initiative tend to be positive. Yet, the presentations at IFAD were a new experience, mainly because of the overwhelmingly positive reactions of participating staff members.

The IFAD West and Central Africa Division will have its annual retreat at the end of April. One of the agenda items will most likely be whether or not they will support re-greening activities in the Sahel. They may well do so, because IFAD already has a very successful re-greening project in Niger’s Aguie department and in Burkina Faso they have funded land rehabilitation for 20 years. They can build on experience obtained in several existing projects. 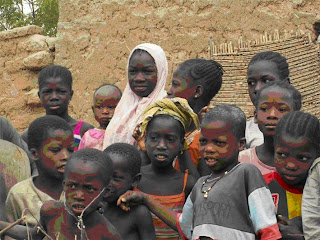 Our challenge is to improve the livelihood perspectives of these Malian children living on the Seno plains. The agroforestry parkland of their village is young and expanding. Protecting and managing natural regeneration is a low-cost, cost effective pathway to agricultural intensification. Also poor farmers can afford it. 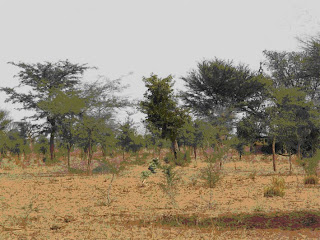 2. Presentation at “Nederlandse vogelbescherming” (Netherlands Society for the Protection of Birds”

Increasing the number of on-farm trees produces multiple impacts….like reducing wind speed and local temperatures, increasing the availability of fodder, firewood, etc. Until now we have overlooked that it also has a positive impact on millions of European songbirds, which migrate to the Sahel to spend the winter in this region.

On April 7 a presentation was made to staff of the Netherlands Society for the Protection of Birds. Their intention is to develop significant re-greening action in the Sahel and to submit a proposal to a foundation in the Netherlands. Impact on European birds is a pinoff…improving rural livelihoods is key. I have informed our re-greening coordinators in Mali, Burkina Faso and Niger (Mary Allen, Mathieu Ouedraogo and Prof. Toudou) about this development. Mathieu’s reaction was…several farmer innovators are feeding and watering birds in the dry season….because their droppings contain tree seeds and they help control pests.

3. Launch of the documentary about Yacouba Sawadogo (“The Man Who Stopped The Desert”)

On March 26 the documentary about farmer innovator Yacouba Sawadogo was launched officially in a cinema in Norwich (UK). You can go to www.1080films.co.uk to watch the trailer. The reactions were overwhelmingly positive. Mark Dodd, who made the documentary, is now approaching TV channels to show it.

The Washington-based Worldwatch Institute has a long history of producing annual “State of the World” reports, which are read by policy makers, journalists, farmer organisations and many other stakeholders. We will contribute a chapter to “State of the World 2011”.


5. Developing an International Advisory Group and creating a pool of specialists in re-greening: first steps

As mentioned before, African Re-greening Activities is about developing a movement, which is owned by its stakeholders. This movement is growing and will continue to do so. It is important to create an international advisory group composed of national coordinators, external specialists and representatives of funding agencies. Reflection about its composition and tasks has begun. Such an advisory group should meet at least once a year.

Because re-greening activities in Africa will increase, it is urgent to begin composing a pool of specialists, who can design new programs, train land users, initiate and participate in national policy dialogue, etc.

The national coordinators have been asked for suggestions regarding the composition of the International Advisory Group as well as for the pool of re-greening specialists.

During the next four weeks, the main thrust will be on developing a re-greening initiative in Ethiopia. A proposal will be submitted to Adessium Foundation in the Netherlands before the end of May.

Important opportunities for advocacy are emerging ....June 1 Davos, June 5 Bonn, June 26 – 28 Cape Town. More about this in the next activity report.

But remember…you can all be champions of re-greening.