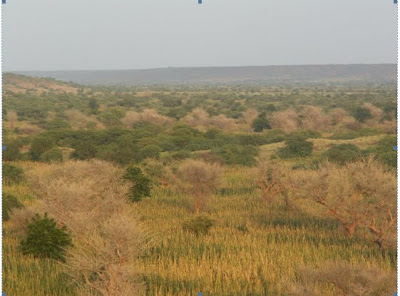 The Badaguichiri valley in Niger was in the 1980s and 1990s scarred by a big gully,
which rapidly drained most rainfall and runoff. Since the building of long and low dams across the valley floor and the introduction of simple water harvesting techniques on the surrounding plateaus, the situation has improved significantly. This picture shows a well developed agroforestry landscape. The faidherbida albida trees look greyish as they don’t have leaves in the rainy season. Sorghum and millet benefit from the nitrogen fixation by faidherbida albida.

1. African Re-greening Initiatives (ARI) wants to build on and expand the scale of existing successes in farmer-managed re-greening in drylands. The message that the protection and management of trees and bushes, which emerge spontaneously, is a low cost and efficient form of agricultural intensification, is increasingly getting across.

2. A visit to the Seno Plains in Mali confirmed that farmers protect and manage trees which emerge on their farms. They do so at a large scale and most trees are young. Gray Tappan of the US Geological Survey was asked to look into the scale of these new agroforestry parklands. His analysis of high resolution satellite images revealed medium to high on-farm tree densities on 450,000 ha, which is much more than anyone imagined. Until Gray Tappan established the scale, it was assumed that about 18,000 ha had been re-greened. 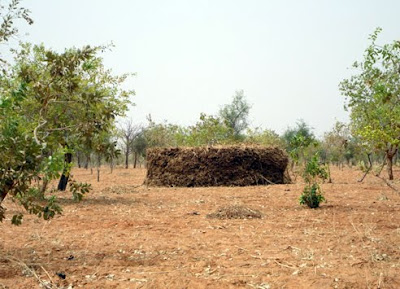 The young agroforestry parkland on Mali’s Seno Plains. This picture was taken end March 2011, which is way into the dry season. Nevertheless, vast quantities of crop residues were still stored on the fields.

3. The re-greening partners in Burkina Faso (Reseau MARP and its partners) and in Mali (SahelECO) and its partners are building a movement around farmer-managed re-greening and they undertake a wide range of activities, including the organisation of farmer-to-farmer visits, visits for national and regional policymakers as well as technicians. They get documentaries on national TV, but also show these in village meetings. They organize groups that discuss agroforestry policy and legislation.

4. The International Fund for Agricultural Development (IFAD) approved a two year grant for “Supporting Farmer-Managed Natural Regeneration in the Sahel”. This will allow us to develop a national policy dialogue around farmer-managed re-greening in Senegal, Mali, Burkina Faso and Niger. Besides the policy dialogue, two more activities are included under this grant. The first is a study on the socioeconomic impacts of agroforestry systems in the Sahel, which is implemented by the World Agroforestry Centre (ICRAF). The second is the production of 12 mini-documentaries about successful adaptation to climate change in Afrca’s drylands. These documentaries will be ready by mid-2012.

5. In November a start was made with the formulation of a national re-greening strategy and action plan for Niger. This process will be finalized early in 2012. This activity is funded under the IFAD project mentioned under 4. 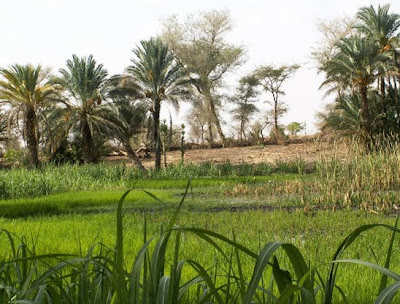 Southern Zinder (Niger) has many small depressions surrounded by sandy dunes (wetlands in drylands). Farmers grow a large variety of crops and trees in these depressions, which include sugar cane, rice, date palms, vegetables, fruit trees (papaya and mango). On the surrounding sand dunes, the number of Faidherbia albida is increasing.


6. The Web Alliance for Re-greening in the Sahel (www.W4RA.org) is increasingly operational. In November, the first version of a newly developed voice-based Radio Marché system was tested in Mali. Radio Marché will be used by SahelEco and by two community radio stations in Segou and Tominian.Radio Marché has been developed in close collaboration with the end-users, who actively contribute in its development. It is based on mobile voice and web technologies. It has been designed to automatically generate voice communiqués of market information, which can be broadcasted on the radio.

7. More good news from the web alliance. In November the W4RA was informed that it had won the International Press Institute contest. The proposal, to deploy innovative voice services for the empowerment of radio journalists in Mali, who work for community radio stations promoting Re-greening Initiatives in the Sahel, has been selected amongst 376 proposals. From the 376 proposals submitted, only 3 received a grant. The project will run during 12 months, starting in 2012.

8. In September, Chris Reij visited Nairobi to explore the possibilities for a re-greening initiative in Kenya and to build stronger links with the World Agroforestry Centre (see ARI update 2011 no.6). There’s an exceptional opportunity for promoting farmer-managed re-greening in Kenya as it is the only country in Africa, which has included I its constitution that all farmers should have 10% of their land under trees. Protecting and managing spontaneous regeneration on-farm and off-farm is an interesting option for Kenya’s drylands.

9. The working links with the World Agroforestry Centre (ICRAF) are increasingly stronger. Invaluable support was provided during the September visit to Nairobi and close contacts are maintained with Dennis Garrity, until recently DG of ICRAF and the driving force behind its Evergreen Agriculture Initiative.

10. Tony Rinaudo of World Vision Australia is another driving force behind re-greening. In June Tony Rinaudo, Gray Tappan and Chris Reij visited the Kaffrine area in Senegal where World Vision Senegal is promoting farmer-managed re-greening. Several farmers from the Kaffrine area visited Niger 4 years ago and upon return they began protecting and managing spontaneous regeneration. Re-greening now takes place on about 40,000 ha and intensification in existing areas and expansion to others is certain.

11. In 2011, Tony Rinaudo also successfully trained farmers in such diverse countries as (Northern) Ghana, Tigray (Ethiopia), East Timor and East Sumba (Indonesia). In Tigray the regional government is now institutionalizing farmer-managed re-greening. Tony will be asked to produce a next ARI update as soon as he has time in his busy schedule. The message is spreading to other parts of the world.

12. In September, Chris Reij made a presentation at the World Resources Institute in Washington (www.wri.org) World Resources Institute (WRI) is one of the driving forces behind a new Global Partnership for Forest Landscape Restoration. This partnership wants to restore 150 million ha of degraded forests till 2020. That’s a bold target, which requires bold action. A link will be built between this partnership and African Re-greening Initiatives.

13. The documentary “ The man who stopped the desert” made by Mark Dodd about the life, innovations and impact of Yacouba Sawadogo, farmer innovator in Burkina Faso, won 7 awards in 2011 (www.1080films.co.uk). On December 12, Yacouba received a national decoration (Chevalier de l’Ordre de Mérite Nationale).

14. LucGnacadja, the Executive Secretary of the UN Convention to Combat Desertification, invited Yacouba Sawadogo and Mathieu Ouedraogo to join a special day at the Caux Forum on Human Security in Switzerland, which was dedicated to discussing the restoration of the Earth’s degraded lands (www.cauxforum.net). About 250 participants from 50 countries watched the documentary, which triggered many positive reactions.

16. The media continued to pay attention to farmer managed re-greening. Articles were published, amongst others, in: The New Yorker (Dec. 19&26), Le Monde Diplomatique (November), The Nation (November) Our Planet, which is UNEP’s flagship publication (September), Ökotest (December) as well as a special issue Environment and Energy published in August, Bild der Wissenschaft (August), Welt am Sonntag (March 27), Suddeutsche Zeitung (October 31) and Daily Telegraph (July 15). This media exposure acts as counterweight against the usual doom and gloom stories published about drylands.

17. The re-greening movement is building and the number of champions is increasing. Just to give some examples. In September, Roland Bunch (www.rolandbunch.com), who authored the famous book “Two Ears of Corn: a guide to people-centered agricultural improvement” mentioned his support for re-greening and a willingness to get involved. In the same month Groundswell in Ghana (www.groundswellinternational.org) expressed its interest in developing re-greening in Northern Ghana and they will mobilize their own funding.

1. Key in 2012 will be…let’s catalyze more on the ground action…and let’s develop dialogues with national and international policymakers around re-greening. The financial support by FINHUMF and the IFAD grant for 4 countries in the Sahel will help us to continue pushing forward.

2. A national re-greening workshop will be organized in Ethiopia early in 2012 about re-greening successes in this country. The Government of Ethiopia intends to reforest 15 million hectares and to plant 100 million fertilizer trees (Faidherbia albida). The objective of the workshop will be to try to feed some lessons into national policy and practice. The workshop will be co-organized by the Horn of Africa Regional Environment Centre, FAO and FarmAfrica.

3. A regional workshop on re-greening will be organized by World Vision early April in Nairobi. Tony Rinaudo will spend 3 months in this region to visit partner and provide training.

4. The national re-greening strategy and action plan for Niger will be assessed in a national workshop early this year. There is no reason why this national strategy should not become operational in 2012.

5. Closer links will be forged not only with World Resources Institute and the Global Partnership for Forest Landscape Restoration, which I now tend to call more simply…Global Re-greening Initiative, but also with Evergreen Agriculture, World Vision Australia and with other re-greening initiatives.

Finally I would like to thank all of you who have directly or indirectly provided support to re-greening under ARI. I wish you a healthy and inspirational 2012. Let’s together try to make the world a bit greener to improve food security, adapt to climate change, reduce rural poverty, alleviate the burden of women and girls have who collect firewood, increase the fodder available to livestock, maintain or improve soil fertility, increase biodiversity, restore ecosystem services. Resource users can do it themselves, but sometimes they need a bit of external support…not necessarily money, but new ideas and new experience. There is no other intervention that produces so many benefits at such low costs. Let us catalyze more action. Your involvement in this process is vital.