Update no. 2: Impressions of Niger in January 2012 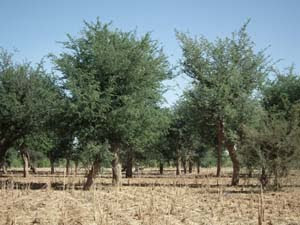 This picture was made on January 19, 2012 in the Adouna valley (Tahoua Region, Niger). The valley is about 40 km long and has a Faidherbia albida dominated parkland on about 40,000 ha. In some places the parkland is very dense and it has a good mixture of trees in all age classes. The crop residues shows that all the land between the trees is cultivated. Groundwater in this valley is fairly low and soils are quite fertile. This partially explains why this parkland is in such a good shape. Several long low dams have been built across the valley floor, which force runoff to infiltrate. Higher groundwater levels have allowed the expansion of irrigation. If the irrigated area is 1500 ha and the average yield of onions is 20 ton/ha, then this valley alone already produces 30,000 tons of vegetables.

One of the first major events in 2012 would have been a study visit by a delegation from Nigeria to Southern Niger. This delegation would draw lessons from re-greening in Southern Niger for agroforestry policy and practice in Nigeria. The Heinrich Böll Foundation in Abuja had composed an extraordinary delegation of about 30 participants representing policymakers from all 12 states bordering Niger, researchers, NGOs, staff of the Federal Ministry of Agriculture. Unfortunately the visit had to be postponed at the last minute due to the general strike in Niger, which led to the closure of banks, gas stations and the border between Nigeria and Niger. Together, we will start looking for a new date.

The visit was postponed just upon our arrival in Niger, so it was decided to anyway make a field visit to the Dosso, Maradi, Zinder and Tahoua Regions.

Let me share with you some pictures and impressions.
The purpose of the visit to the area around Dogon Kiria (Dosso region) was to look at re-greening activities just started in this “commune” under a project managed by Both Ends and funded by the Netherlands-based Turing Foundation. A major indicator of farmer-managed re-greening is that suddenly one can see everywhere in the fields young trees that have been pruned. The area where this is happening has about 350 mm rainfall and is at the edge of where cultivation is possible. The young pruned trees show that the process has begun.

A visit to parts of the Maradi and Zinder regions is always a source of inspiration. It is where farmers have built new agroforestry parklands on 5 million ha. Let me tell you about some new impressions.

Inter-village institution building for land rehabilitation and re-greening
Not far from the small town of Illéla (Maradi Region) water harvesting techniques (half moons) are used to successfully rehabilitate barren degraded land. This is not new in itself, but what is new is that this is done jointly by a number of villages and they have set rules for the protection and management of the trees planted in the half moons and those that emerged spontaneously (see picture 2). Villagers use bicycles to police the rehabilitated area and they have developed sanctions for those who don’t respect the rules. This activity was initiated by the IFAD-funded PPILDA project. It would be very useful to analyze and document this experience as it is one of the few examples of successful inter-village institution building for land rehabilitation and re-greening.

As Abasse Tougiani explained, it is important to involve school children in re-greening and the children of the school shown in picture 3 know about the role of trees in reversing land degradation and they have been trained to prune trees. These kids will soon receive a delegation of school children from another village and they will inform and train them in re-greening. This was the first time that I’ve seen farmer-managed re-greening introduced into the curriculum of a primary school. Looking at the enthusiasm of the children, it is obvious they have become champions. 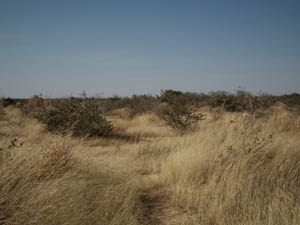 Barren degraded land rehabilitated collectively by a group of villages in the Illéla department. 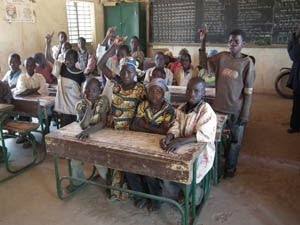 Large-scale regeneration of baobabs in the Mirriah department (Zinder Region)
Although Southern Zinder is dominated by young agroforestry parkland, there are also significant areas where other trees dominate. Around the small town of Mirriah one finds vast areas with baobabs in all age classes. Picture 4 shows a dense stand of fairly old trees, which produce valuable leaves and fruit. The owners of the trees often sell the leaves on the tree to young men, who harvest them, put them in bags and sell the leaves in regional markets. It is said that baobabs in the Sahel barely regenerate, but they do so at significant scale in the Mirriah department, but also in the Yatenga region of Burkina Faso. 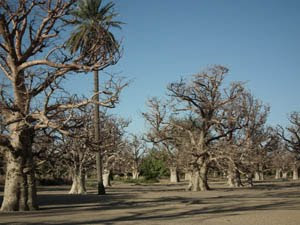 An impressive stand of baobabs close to Mirriah

New agroforestry parklands and locally rising groundwater levels in the village of Batodi (Tahoua Region)
After having travelled through the 42 km long Adouna valley, we decided to make a quick visit to the village of Batodi, which I had visited several times between 1989 and 1994, then again in 2004 and for the last time in 2006. In 1990 this village was surrounded by a vast expanse of barren degraded land and with the support of an IFAD-funded soil and water conservation project villagers had timidly begun to rehabilitate barren degraded land using “zaï”. Sitting down with villagers in 1991, I joked:
“ can I buy some degraded land to rehabilitate it with zaï”. Their reaction was…”no you can’t ..if someone sells land we’ll buy it ourselves”. This I how I coincidentally stumbled across the fact that a land market had emerged and that people were buying and selling degraded land using simple water harvesting techniques to rehabilitate it.

When I got back to Batodi in November 2004 after not having visited the village for a decade, the first thing they said was…” the water level in our wells is now only at 4 m depth, and it was at about - 18 m when you were here last time”. The higher level of water in the wells allowed women start a vegetable garden. As 2004 was a drought year (less than 200 mm rainfall in this area), the vegetable garden was vital to women. They sold the vegetables on the market and their families consumed what they could not sell. The number of vegetable gardens in this village had increased from 2 in 2004 to 10 in 2012. Picture 5 shows one of these vegetable gardens. 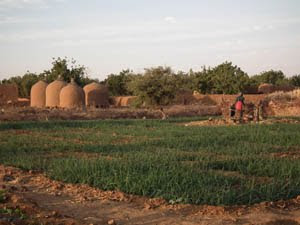 Onion is the most popular vegetable grown in the village of Batodi, like in many other places in Niger.

The question arises as to how this increase in groundwater levels can be explained? We looked at two wells at the end of the day and water was at 4 – 6 m deep and it is apparently at about 3 – 4 m early in the morning before they begin irrigating. Is it increased rainfall? Interestingly, 2004 was a drought year and so was 2011. This makes it unlikely that increased rainfall has caused local groundwater level to rise. If increased rainfall would be the major causal factor, then also other villages would experience a rise in groundwater levels and that is not the case. A much more likely explanation is that the systematic rehabilitation of degraded land using water harvesting techniques, which forces rainfall and runoff to infiltrate has led to a local recharge of groundwater. 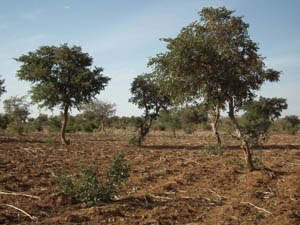 The agroforestry parkland in Batodi is young and in parts dominated by Piliostigma reticulatum, which provides fodder for livestock. The picture shows a field that was completely barren 20 years ago. The densities are variable, for instance, tree densities in the background are much higher.. Farmers made it clear to us… higher densities are good for the crops.

Agroforestry parkland and food security
2012 will be a very difficult year in various parts of the Sahel. The food deficit of Niger is estimated to be more than 500,000 tons. Within a few weeks, the results of a study will be available, which explores the relationship between farmer-managed natural regeneration in Southern Zinder and household food security. If all goes according to plan, the next ARI update will report the major findings of this study.
The next ARI update will be written as soon as the results of the above-mentioned study will be available.

You can find more information about ARI and related projects on the Web Alliance for Re-greening in Africa.