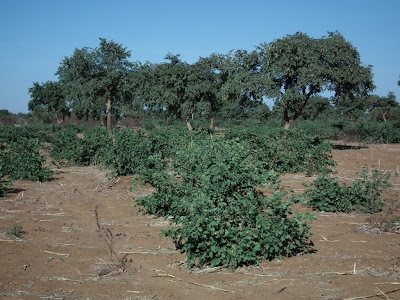 A dense stand of Piliostigma reticulatum on fields in the Konni department of Niger (January 2012).Their pods are good fodder for livestock and also serve as famine food. They are perceived to improve soil fertility. In the background a number of trees, which have been pruned and developed a trunk and a canopy. In the foreground very young and dense Piliostigma bushes that capture a lot of fine and fertile dust moved by the harmattan winds.

The international media are drawing our attention to the food crisis, which is emerging in the Sahel. They express the fear that the Sahel is facing a crisis similar to the one recently experienced in the Horn of Africa. The 2011 rainy season in the Sahel was characterized by low and irregular rainfall and in some regions also by crop pests. In November 2011 it was estimated that Niger alone would have a food deficit of almost 600,000 ton. The indication is that not all areas in Niger are equally affected by shortages in cereal production. A map produced by the Famine Early Warning Systems (FEWS) in September 2011 indicated that the predicted shortages seemed to be less severe in some areas of Southern Niger with high density on-farm trees.

Using some funds from the International Fund for Agricultural Development available for developing a national policy dialogue around re-greening, two researchers from the University of Niamey (Prof. Yamba Boubacar and Mr. Sambo) undertook a quick study in five villages in the Kantché department (Southern Zinder) to look at re-greening and food security. On February 24 they forwarded a first draft report. They did a survey among 197 farm households, but they also looked at some national statistics. Let’s start with the latter. The data of the National Committee for the Prevention and Management of Food Crises and the Famine Early Warning Systems in Niger indicate that the Kantché Department (350,000 inhabitants) systematically produced a cereal surplus since 2007 and also in 2011.

Is it a coincidence that this area with high population densities and high on-farm tree densities produces cereal surpluses? Can it be due to other interventions? Can it be that this area received a bit more rainfall and/or had a slightly better distribution of rainfall? What we can say at this stage is that the surplus is not due to other interventions. It also true that most of this area has high density young agroforestry parkland strongly dominated by Faidherbia albida, a nitrogen fixing species, which helps maintain and improve soil fertility. Although the Kantché department as a whole produced a cereal surplus in 2011, the poorest farmers will still be facing food shortages.

The information in the draft report also shows that the poorest households often derive significant income from their on-farm trees in the form of fodder, firewood, fruit and leaves part of which is sold on the market. Trees are an important source of farm income. Yamba and Sambo mention, for instance, that the sale of leaves from a single mature baobab tree (Adansonia digitata) generates an income of 27 US $ to 75 US $ depending on when the leaves get on the market. This income alone allows the owner of the baobab(s) (often women) to buy 75 to 175 kg of cereals on the market. In parts of the Mirriah department (Zinder Region), baobab is the dominating species and one finds many mature, but also young baobabs.


Why do farmers invest in trees?
Yamba and Sambo asked farmers why they protected and managed on-farm trees. They could provide more than one answer, but the dominating answer was (58%) for soil fertility and for food (25%). Farmers (men and women) across the Sahel are very worried about declining soil fertility and are ready to do everything to reverse a decline in soil fertility and certain tree species are perceived to improve soil fertility (Faidherbia albida, Piliostigma reticulatum, Combretum glutinosum, Guiéra senegalensis).

Some conclusions about agroforestry
1. On-farm trees increase and stabilize access of farm households to food. They reduce the risk of crop failure and even if crops fail, the trees provide other forms of income that allow farmers to buy expensive cereals on the market.
2. Average cereal yields under agroforestry in Niger remain low (usually about 450 kg/ha or more depending on soils, soil fertility management and groundwater level) and the use of modest doses of inorganic fertilizers is required to significantly increase yields.
3. Tree litter helps maintain or improve soil fertility by increasing the organic matter content of the soil, which improves the efficiency of fertilizer use and the water holding capacity of the topsoil. Trees first and micro doses of fertilizers next.
4. A recent study has shown that in certain situations trees can also decrease cereal yields, but the study did not indicate under which conditions. None of the farmers in the new agroforestry parklands in Niger, Mali and Burkina has ever mentioned this. Even if this would be the case, the multiple benefits of the tree capital outweighs a loss in cereals. If this were not the case, the farmers would cut the on-farm trees. 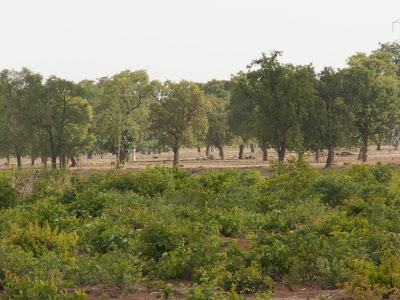 This picture of an old agroforestry parkland dominated by shea trees (Vitellaria paradoxa) and néré (Parkia biglobosa) in Mali shows that the vegetation on the communal fields has been destroyed for the production of charcoal for the capital Bamako. However, no one touches a single tree in the parkland. Tree densities are high and the canopy cover is significant. This may lead to lower cereal yields, which is very likely more than compensated for by the value of the products produced by these trees.

5. Although not everybody will readily believe it, when young trees are pruned, they develop a trunk and a canopy, and the prunings produce twigs that women can burn in their kitchen and the leaves add to the organic matter content of the soil. Trees produce benefits quickly and depending on species, rainfall and altitude can grow rapidly.

Water harvesting, groundwater recharge, small-scale irrigation and trees
The rural population in most drylands is rapidly increasing in absolute numbers, which makes it essential not only to increase food production and improve access to food, but also to increase the availability of water for the growing human population, but also for their livestock and for small-scale irrigation. This requires that available rainfall and runoff is captured and stored as much as possible in the soil.

We have a lot of anecdotal evidence of local increases in groundwater after the introduction of simple water harvesting techniques, like planting pits, half moons, contour stone bunds and low water spreading dams. They all force rainfall and runoff to slow down and infiltrate into the soil. ARI update 2012 no.2 tells the story about the village of Batodi in Niger’s Illéla department, which experienced a significant increase in water levels in their wells since they introduced planting pits and half moons in the early 1990s. The cereal crops in this village largely failed in 2011, but there are now 10 vegetable gardens in the village (0 in 1994). It will be a harsh year for many farm households, but without the investments in water harvesting it would have been a lot harsher. Similar stories can be told for the Northern part of Burkina Faso’s Central Plateau and for villages in Tigray (Ethiopia). 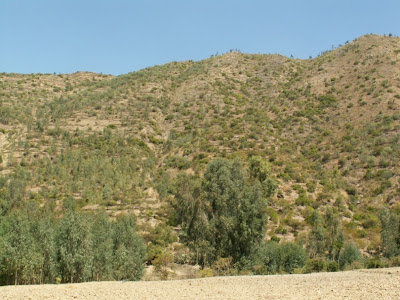 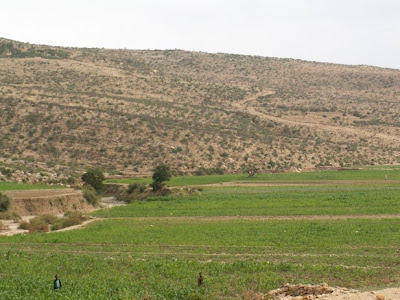 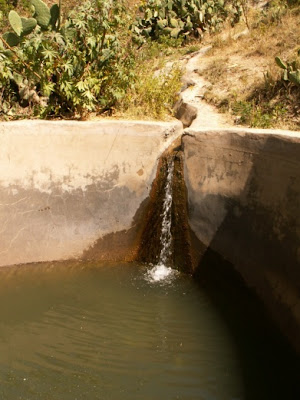 Natural regeneration on degraded slopes in combination with stone walls forces rainfall and runoff to infiltrate, which leads to groundwater recharge and expansion of irrigation in valleys and to the emergence of permanent springs (Tigray, Ethiopia).

We have a lot of anecdotal evidence, which taken together point to a plausible relationship between water harvesting and local groundwater recharge, but this is obviously one of the gaps in our knowledge that needs to be filled.

Conclusion
It is vital to create more productive and drought resilient farming systems in the Sahel and in the Horn of Africa to increase food production and improve soil fertility. Expanding agroforestry and developing water harvesting systems to recharge groundwater are vital first steps. There is no time to lose.