ARI UPDATE 2012 NO.4 BUILDING PARTNERSHIPS FOR REGREENING IN AFRICA 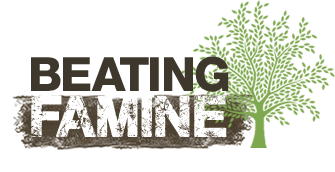 The latest update mentioned that the Kantche district in Niger, which has a high population density and high on-farm tree densities, produced a grain surplus of almost 14.000 tons in 2011. This is lower than in preceding years, but still of interest. It appears that also the region around Bankass in Mali, which has a vast young agroforestry parkland, has produced a grain surplus in 2011. The figure mentioned is 50,000 tons. It remains to be verified, but any surplus in 2011 is good. It goes without saying that despite an overall surplus in a region, many families will experience hardship in 2012. Nevertheless, these examples are bright spots in a situation in the Sahel characterized by major cereal deficits. Question is…can these surpluses be attributed to the new agroforestry parkland? It’s a question to be explored, but it is likely.

The Beating the Famine Conference in Nairobi (10 – 13 April 2012) This conference was organized jointly by World Vision and the World Agroforestry Center. The almost 200 participants (development workers, policymakers, researchers, journalists) assessed the current experience with farmer-managed regreening, looked at the multiple impacts of regreening and got some practical training in how to prune. The participants came from Kenya, Uganda (including the Ministers of Agriculture and of Planning), Ethiopia, Tanzania, Niger, Tchad, Puntland….. Many journalists from the region interviewed participants and the “Zweites Deutsches Fernsehen” (Second German TV channel) had a short item in its evening news about the conference. Information about the conference can be found at www.beatingfamine.com An informal partnership to promote re-greening On Saturday 14 April a number of people, representing the World Agroforestry Centre, African Forest Forum, World Resources Institute, World Vision Australia, Center for International Cooperation Free University Amsterdam, met to discuss the conference and its follow up and they established an informal partnership pledging to work together to promote re-greening in order to develop an Evergreen Agriculture in Africa. One of the drivers is the growing awareness that a dangerous scenario is now unfolding in parts of Africa, which may lead to structural famine in the next decade. This point has been made in earlier updates….soil fertility is depleting in many areas, rainfall is becoming more erratic and more extreme, more long dry spells occur during the rainy season. In combination, these trends are depressing crop yields in a context of often rapid demographic growth. At the same time, cereal prices are reaching record highs again, which creates hardship for the urban poor, but also for small farmers who do not produce enough to cover family food needs. The world food stocks are low, which means it cannot be taken for granted that food deficits can be covered by food aid. “Business-as-usual “is no longer an option. The informal partnership discussed a mix of measures for sustainable intensification, comprising the building of new agroforestry systems through farmer-managed regreening, the introduction of simple water harvesting techniques in semi-arid regions (400 – 800 mm rainfall), which increase the quantities of water available to crops and to trees, and the use of small quantities of inorganic fertilizers ideally in those situations where agroforestry has already increased the quantity of organic matter in the topsoil. The efficiency of fertilizer use is determined by the soil organic matter content (SOM), which also has a positive impact on the water holding capacity of the soil. Let’s briefly present here those who participated in this meeting.

Roland Bunch is an agro ecologist and author of “Two Ears of Corn: A Guide to People-Centered Agricultural Improvement”. He has served as Head of the Department of Rural Development at the Pan-American Agricultural School of Honduras, as the Director of Sustainable Agriculture and Rural Livelihoods for World Neighbors, a US-based NGO working in integrated rural development and as Co-Founder and former Coordinator of COSECHA (Association of Consultants for a Sustainable, Ecological and People-Centered Agriculture) in Honduras. He has consulted widely in three continents and is renowned for promoting sustainable, "people-centered" agriculture, including "farmer-to-farmer extension" and "participatory technology development" methodologies. 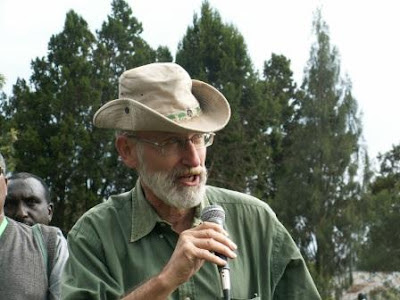 Dennis Garrity is Distinguished Board Research Fellow and former Director General of the World Agroforestry Centre. He has recently been designated as UNCCD Drylands Ambassador, and is involved in a global effort examine unconventional ways of creating more productive and environmentally sound farming systems. He chairs the Steering Committee for Landcare International, was previously the Regional Coordinator of the Southeast Asia Programme of the World Agroforestry Centre (Bogor, Indonesia) and was agronomist and Head of the Agroecology Unit at the International Rice Research Institute in the Philippines. He has a Ph.D. in crop physiology (University of Nebraska).

Larwanou Mahamane is Senior Programme Officer at African Forest Forum. Formerly a research scientist in the Forestry Department at “Institut National de la Recherche Agronomique du Niger” (INRAN), he joined the University of Niamey as a lecturer and research scientist in 2006. In Niger he conducted research in forestry and agroforestry, developing agroforestry technologies for improving parkland systems in the Sahel. He has published many articles in peer reviewed journals and coordinated many scientific collaborative projects. Dr Larwanou obtained his B.Sc. and M.Sc. in Forest Ecology/Agroforestry (University of Ibadan, Nigeria) and his Ph.D. (University Abdou Moumouni of Niamey) in 2005.

Chris Reij is a Sustainable Land Management specialist of the Centre for International Cooperation, VU University Amsterdam and a Senior Fellow of the World Resources Institute in Washington. He works in Africa since 1978 and is currently facilitator of “African Re-greening Initiatives”, which supports farmers to adapt to climate change and to develop more productive and sustainable farming systems. The approach of this initiative is to expand the scale of existing successes in re-greening (agroforestry, participatory forest management) by individual farmers and communities. 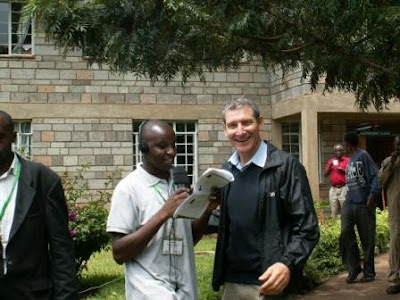 Tony Rinaudo is involved in the development and promotion of agricultural-forestry-pastoral systems across a range of environments. Tony previously spent 18 years in Niger (1980 – 1998) managing a long term agricultural development program and he catalyzed the process of re-greening in Niger’s Maradi Region in 1985. He has recently given training courses in farmer-managed re-greening in Senegal, Ghana, Ethiopia, Kenya, Indonesia and East Timor.

Robert Winterbottom is Director Ecosystem Services at the World Resources Institute (WRI), Washington, D.C. He has worked in reforestation in Burkina Faso; desertification control planning with the Interstate Committee for Drought Control in the Sahel (CILSS); institutional strengthening for improved coordination of natural resource management (NRM) in Niger; community-based NRM in Namibia; integrating environmental governance and poverty reduction through natural resource based enterprise development in Senegal and Bangladesh; assessing needs and opportunities for climate change adaptation in Madagascar and Vietnam and in preparing the Tropical Forestry Action Plan (World Bank, UNDP, FAO and WRI). He earned a M.Sc. (Forest Science) from Yale University. We will create opportunities to jointly design projects and programs. The individuals mentioned above agreed to form an informal partnership, but the regreening movement is much bigger. Let’s present a few more partners. 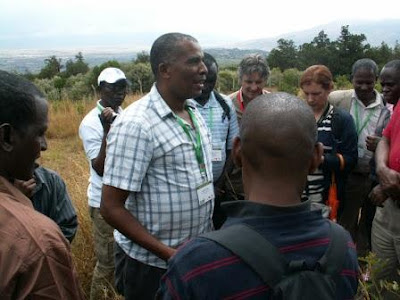 Assefa Tofu is the NRM advisor of World Vision Ethiopia (WVE) and a driving force behind WVE’s regreening activities. The picture shows Assefa Tofu giving conference participants some hands on training in selecting stems for removal and in pruning. 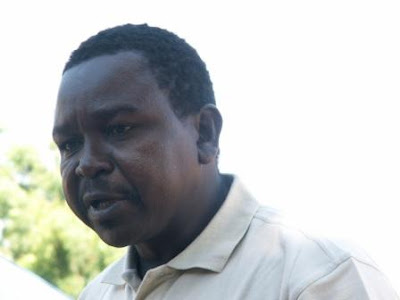 Abasse Tougiani , who is a researcher attached to Niger’s National Agricultural Research Institute, has been based for many years in Maradi where he cooperated closely with Tony Rinaudo and with the IFAD-funded project in Aguié, which is successfully promoting regreening by farmers. 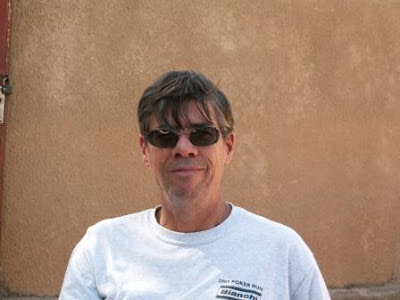 Gray Tappan of the US Geological Survey’s EROS (Earth Resources Observation and Science) Center in South Dakota is a geographer who specialized in remote sensing of land use and vegetation. He made and continues to make invaluable contributions to our understanding of long term changes in vegetation. The satellite images Gray has provided of the same villages for different periods have helped convince many people that parts of the Sahel are now greener than 20 – 30 years ago. 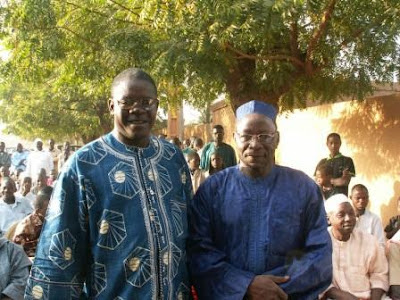 Mathieu Ouedraogo (on the left) is the regreening coordinator of African Regreening Initiatives in Burkina Faso. He began his career in the early 1980s when working for the OXFAM-funded Agroforestry Project in the Yatenga region, which was one of the most innovative water harvesting projects. On the right prof. Adam Toudou, regreening coordinator in Niger, dean of the Faculty of Agriculture of the University of Niamey. 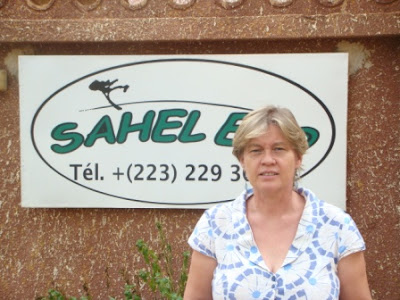 Mary Allen Ballo is an environmental scientist by training, executive secretary of SahelECO, and ARI regreening coordinator. She has worked for more than two decades in Mali and has made SahelECO one of the leading environmental NGOs of the country. These are just some of the regreening champions. In future updates some more partners/champions will be shown. The next ARI update will be published either just before the visit by a delegation from Nigeria to Southern Niger (June 4 – 7) or shortly after it. Recent French updates can be found on: www.reverdir-afrique.com