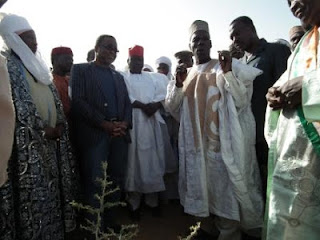 Luc Gnacadja, Executive Secretary of the UN Convention to Combat Desertification (second person from left) visits re-greening in Niger’s Zinder Region (February 14, 2013) and discusses with villagers about scale and impacts of re-greening

Some highlights since November 2012 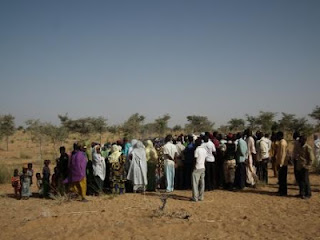 This visit helped to bust some myths. One of them is that livestock is, as commonly assumed,a source of degradation of vegetation. The villagers made it clear that the manure of livestock contains seeds of trees and bushes and in this way livestock can be a source of re-greening. Twenty years ago they used all manure as a source of energy in their kitchen, but now they have sufficient firewood from pruning the on-farm trees and all manure is applied on their cultivated fields. Livestock management is also changing from extensive to semi-intensive. Another myth is that it takes a generation before trees are big enough to be exploited. Young trees need to be pruned from the first or second year and depending on species, they can grow fast. 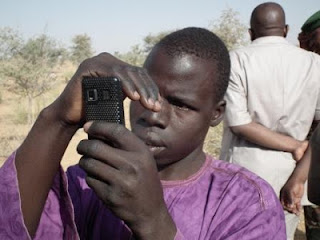 A young man in the village using his mobile phone to take pictures of Luc Gnacadja, who was accompanied by the Governor of Zinder.

Visit to His Excellency President Issoufou Mahamadou of Niger

The visit by the Executive Secretary of UNCCD involved meetings with the Prime Minister and the Minister of Water and Environment of Niger, the Niger Basin Authority, and representatives of civil society organisations and Niamey-based research institutes. Upon return from the field, a press conference was held and the national TV news reported extensively about the visit. Highlight was a meeting with His Excellency Issoufou Mahamadou, President of Niger, who showed great interest in the impressions and findings of the Executive Secretary. The President is well aware of the scale and impacts of re-greening in Niger and he reacted positively to a suggestion to create an annual Presidential Award for the best agroforestry village in Niger.

About 40 participants joined a workshop in Niamey to validate a draft national agroforestry strategy. Two working groups produced very constructive comments and suggestions. The document will be finalized in the next few weeks. It is interesting to note here that the workshop was also attended by participants from Burkina Faso and Senegal. Both countries are using the draft strategy for Niger and plan to adapt it to their own specific conditions. Visit to Yacouba Sawadogo (February 8) Yacouba Sawadogo, who created a highly diverse forest on what used to be barren and degraded land not only continues to draw media attention, but he also continues to innovate. The picture below shows young baobab trees that he planted during the 2012 rainy season. The young trees were planted on very degraded land, which is where they normally will never grow. Yacouba invested in digging pits with a diameter of about 1 meter and filled these pits with organic matter. Until now all planted baobab have survived. 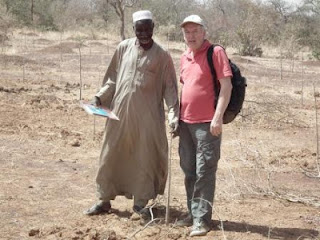 With regard to media attention, a major article was published on November 29, 2012 in the well regarded German newspaper Die Zeit. For those readers who understand German, the link to a shorter version of the article is below. It was a 2 pager written by Andrea Jeska and illustrated with color pictures. It triggered many positive reactions. For those who fly Emirates, this airline will soon include the documentary, “The man who stopped the desert” in its on board entertainment program.

Another highlight was a meeting with a group of young and enthusiastic environmental journalists in Burkina Faso, who have organized themselves in a small association called Media Vert. These journalists are working for radio, TV and press. They have visited farmer innovators in Burkina Faso and have subsequently been writing and talking about their findings. Steps are now being taken to link them to an emerging organization of African environmental journalists and to create opportunities for exposure to existing successes in natural resource management. 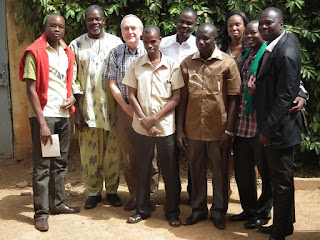 The second person to the left is Mathieu Ouedraogo of Réseau MARP who took the initiative in the middle of 2012 to bring the journalists to the field as part of the IFAD funded project to support a national policy dialogue around re-greening.

During the last few months, numerous opportunities have emerged to present re-greening and its multiple impacts on food security, resilience, household energy, adaptation to and mitigation of climate change to different audiences. Presentations included:

- a presentation to the Washington DC chapter of the Society of American Foresters, a US based professional association that includes foresters and natural resource management specialists with a keen interest in agroforestry (January 17)

- at the Brussels development briefings organized by the Technical Centre for Agriculture and Rural Cooperation (CTA) . CTA is a joint international institution of the European Union and the African, Caribbean and Pacific States associated to the EU. (March 4). About 200 participants joined the development briefing on “Agricultural Resilience in the Face of Crisis and Shocks”

From March 11 – 19, I’ll be visiting Senegal to meet with IED Afrique, another key re-greening partner. The visit will include meetings with a group of environmental journalists, parliamentarians for the environment and a field visit. The next update (end March) will be about the visit to Senegal and the spotlight will be on IED Afrique and its acivities to develop a national policy dialogue around re-greening in Senegal. In subsequent issues each ARI partner will share what they have done to put re-greening by farmers on the radar screen of national policymakers. The World Bank recently published a major report on “Turn down the heat: why a 4°C warmer world must be avoided”. The next update will also pay attention to the role of trees in turning down the heat. The point will be made that a significant increase in the world’s vegetation cover is vital to turning down the heat.

If you have any suggestions for African Re-greening Initiatives, if you have information to share or if you would like to be part of the re-greening movement, or if you are willing to contribute financially to support re-greening by farmers, please contact: Chris Reij