HOW VEGETATION HELPS TURN DOWN THE HEAT 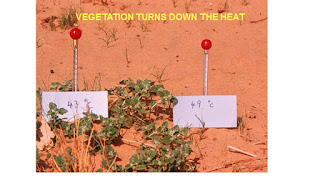 This picture shows that vegetation helps turn down the heat. Even a bit of cover reduces soil surface temperatures by 6 C.

This update is about how vegetation helps turn down the heat as well as about a recent visit to re-greening partners in Senegal.

HOW TO TURN DOWN THE HEAT?

The World Bank published in November 2012 “Turn down the heat: why a 4°C warmer world must be avoided. This report makes the point that “Even with current mitigation commitments and pledges fully implemented, there is roughly a 20% likelihood of exceeding 4°C by 2100. If they are not met, warming of 4°C could occur as early as the 2060s” (p. xiii). This 4°C increase in temperatures is a global average. Certain regions are likely to experience much stronger warming. For instance “the Mediterranean, northern Africa, and the Middle East, as well as the contiguous United States, are likely to see summer temperatures rise by more than 6°C (p. 38). Quoting various studies, the report states for Sub-Saharan Africa that with 4°C or more of warming, 35 percent of cropland is projected to become unsuitable for cultivation. In a 5°C world, much of the crop and rangeland of Sub-Saharan Africa can be expected to experience major reductions in the growing season length (p.62).

The report also states that “Because agriculture in Sub-Saharan Africa is particularly sensitive to weather and climate variables, (75 percent is rainfed), it is highly vulnerable to fluctuations in in precipitation and has a low potential for adaptation” (p.62). I added the bold print and want to raise the question whether it is true that African agriculture has a low potential for adapting to climate change. I would like to argue that the semi-arid and sub-humid regions of Africa (and of other continents) have significant adaptation potential, because tens of millions of hectares of agroforestry parklands in these regions offer major opportunities for turning down the heat (adaptation) and for sequestration of carbon (mitigation). On-farm trees reduce wind speed and reduce temperatures. Diversifying agricultural production systems through increased production of perennial tree crops (wood fodder, edible leaves and fruits) also buffers these systems against rainfall fluctuations and adds to their resiliency. It is interesting to note here that Gordon Conway, Professor of International Development at the Imperial College, University of London recently published “One billion hungry: can we feed the world? “ (Cornell University Press, 2012). This book contains a figure about the carbon sequestration potential of different forms of land use management (page 314). This figure shows that the carbon sequestration potential of agroforestry is higher than from any other form of land use - higher even than fromforest management, grazing management or crop management.

The picture below was used in an earlier update. It shows some young agroforestry parkland on Mali’s Seno Plains. The trees are young and tree density is high. Much too high according to agronomists as the trees will compete with the crops for nutrients and for light. However, for a number of reasons the farmers deliberately want high on-farm tree densities. Firstly, as the picture shows, the trees provide a lot of organic matter to the soil, which is good for maintaining and improving soil fertility. Secondly, the trees provide some shade to the crops. The farmers prune their trees to reduce shade, but they don’t want their crops to be exposed the entire day to the impact of the sun, so they keep some shade. Thirdly, by pruning early in the rainy season, the trees provide a readily accessible source of firewood , which reduces the time needed by women to collectfirewood at a time of the year when they are busy with working the land. 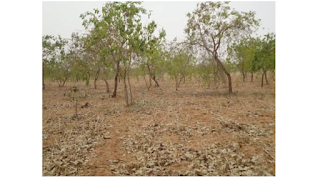 In 2011, I received an email from Bob Mann, who had measured soil surface temperatures during different times of the day in a village in Northern Burkina Faso on November 12 1989. It is important to keep in mind that November 12 is the beginning of the cool season, which explains he low temperatures measured early in the morning. “On 12 November 1989 I recorded day-time temperatures at Oursi village as follows; time air temperature in the shade and temperature on the bare ground in full sun without any shade.

Important micro-organisms in the top soil will die if exposed to temperatures of 55 C and over for more than 1 hour at a time. The value of woodland and vegetation cover in general is self-evident just from this one point of moderating daytime soil-temperature, quite apart from the other important values of micro-nutrient re-cycling from deep down back to the soil surface through leaf-litter fall and decomposition, along with greatly reduced wind speed and reduced soil-moisture evaporation which vegetation brings about”.

The difference in soil surface temperatures under a tree and on adjacent bare ground exposed to the sun is as high as 35°C during the middle of the day. Under the tree the temperature ranges from 25 to 36°C, which is a difference of just 11°C , but look at the situation on bare ground where temperatures increased by 48 degrees C to a high of 71 degrees!! 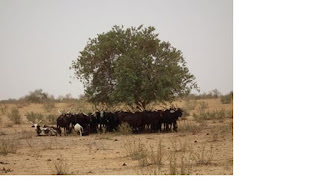 Also livestock prefer to hide under a tree during the middle of the day (Niger, May 2012)

It is obvious that one of the many positive impacts of agroforestry is that it helps farmers adapt to climate change by reducing temperatures of shaded ground and in the adjacent micro-climate. If tens of millions of land users across the Sahel increase on-farm tree densities, they will not only turn down the heat, but also develop more complex and drought-resilient farming systems.

IED Afrique (www. ) is our key re-greening partner in Senegal. With the support of funds from the International Fund for Agricultural Development, IED Afrique is developing a national policy dialogue around farmer-managed re-greening and building a movement to promote re-greening. Mamadou Fall is IED Afrique’s re-greening coordinator and we jointly undertook all activities mentioned below.

Meetings with the Forestry Service and the Ministry of Environment

We met on 3 different days with high ranking officials of the Forestry Service and with senior policy makers of the Ministry of Environment. It was striking that all staff we met agreed that significant investments in tree planting during the last few decades had produced few results. Survival rates of planted trees are low. It seemed that an exception was made for a project called PREVINOBA, which also promoted natural regeneration. During the meetings several successes with natural regeneration in Senegal were identified, but most of them are small-scale. The challenge they perceive is to expand the scale of these successes. This acknowledgement of lack of results of conventional tree planting and an increasing recognition of successes in agroforestry may lead to a paradigm change.

World Vision Senegal is vigorously promoting re-greening by farmers in the area around Kaffrine. During the last 4 years, it has not only flown 88 farmers to Niger to visit re-greening in the Maradi region, but also some forestry agents. We met with farmer leaders representing a group of 70 farmer leaders (including 15 women), who organized themselves in an association and train other farmers in natural regeneration. On-farm re-greening is increasing, but one difficulty mentioned was that some farmers are circulating rumors that if you increase the number of on-farm trees, you risk losing your land to the forestry service or to the regional council. The project patiently and persistently counteracts such rumors, aided by the support of forestry agents who are now commited to supporting farmer managed re-greening.

The village of Khatre Sy, at about 130 km Northeast of Dakar, is one of the first villages that organized itself to protect and manage on-farm natural regeneration. It is surrounded by a well- developed agroforestry parkland (see picture next page). Surrounding villages are looking at Khatre Sy as an example and during our meeting in this village on March 15 (see picture next page), representatives of neighboring villages joined the exchange, which took place in the shade of a neem tree (Azadirachta indica) with a dense canopy. Khatre Sy has developed vegetable gardening with the support of a credit and savings project (FADEC) and one of its impacts has been that it retains young men in the village, who otherwise would have left on labour migration. 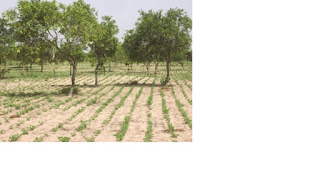 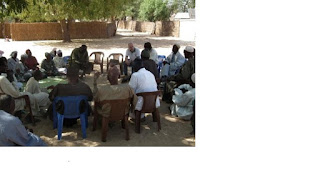 Meeting in the village of Khatre Sy on March 15

GREP: a network of environmental journalists

A meeting with two representatives of GREP led to an interview in a popular breakfast program (called Kenkéliba) on national TV channel. The 15 minute interview on Monday 18 March was supported by shots from a new documentary about farmer-managed re-greening in Senegal, which was funded by the International Fund for Agricultural Development. Re-building a network of parliamentarians for the environment

On March 12 we met with parliamentarian Mr. Mamadou Lamine Thiam, who during the last elections was one of the few parliamentarians who got re-elected. He was leading a group of parliamentarians for the environment, which he is now re-building. This group will meet before the end of March and this meeting will be attended by re-greening partners as well as by journalists of the above-mentioned GREP. Mr. Thiam firmly aims to build a regional network of parliamentarians and other elected officials for environment and the fight against desertification.

In the last week of March a small group of re-greening partners will meet to begin drafting a national re-greening strategy for Senegal. It will use the national agroforestry strategy for Niger s a source of inspiration and adapt it to the specific conditions of Senegal.

On Monday 19 March, a presentation was made on the impact of regreening successes at the US Embassy in Dakar for about 15 staff members of USAID Senegal and of USAID’s regional program. Agroforestry systems in in the triangle between Dakar – Thies – Mboro Anyone who travels from Thies northwards into the direction of Saint Louis, will be struck between Thies and Tivaouane by a locally dense agroforestry parkland. Immediately North of Thies, the parkland is dominated by Borassus aethiopium?..or ronier palms (see first picture next page), whereas towards Tivaouane, the parkland is dominated more by Faidherbia albida. (see next page second picture). Elsewhere one finds more cashew nut. In all cases manioc is planted in-between the trees. When one travels from Tivaouane towards the coast, and subsequently southwards towards Dakar, one is also struck by the enormous scale at which mango is cultivated. Millions of mango trees have been planted in this region and occasionally cashew. A number of fields showed significant regeneration of Faidherbia albida. 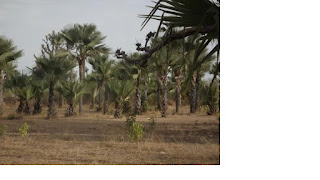 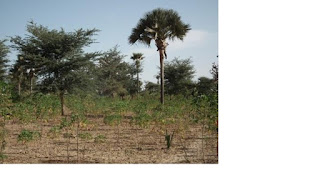