African Re-greening in Amsterdam and Washington

Some highlights of the remarkable month of October 2009

1. The report for September 2009 had stories about the article in Le Monde on August 21, the documentary shown by BBC World about re-greening in Burkina Faso and Mali as well as the short field visit to Burkina by the director of VU Amsterdam’s Network Institute and other VU colleagues to generate ideas for using modern communication techniques to spread info relevant to re-greening. October was a remarkable month, because partners from the Sahel travelled to Amsterdam and to Washington to inform very different audiences about their experience with farmer-managed natural regeneration.

2. Twenty years ago Sir Tim Berners-Lee, who works at the Massachusetts Institute of Technology of Harvard University, invented the world-wide-web, which caused a global revolution in communication. On October 20 VU University awarded him an honorary doctorate for it. Sir Tim has recently created the World Wide Web Foundation, which recognizes that 1.5 billion people have access to the net, but 4.5 billion people still don’t have access. A major objective of the WWW Foundation is to increase access and the first project selected is the African Re-greening Initiative. This new project is called W4RA or Web alliance For Re-greening Africa. It combines our African partners with the WWW Foundation, the (interdisciplinary) Network Institute and the Center for International Cooperation of VU University. A workshop will be held in Burkina Faso in the first week of February 2010 with all partners to develop a proposal.

3. On the morning of October 20, a symposium was held at VU University on “The World Wide Web and Social Development” in which Sir Tim looked at the future of the WWW. This was followed by presentations by two key persons of the WWW Foundation, Steve Bratt and Stéphane Boyera. The second half of the morning’s program was about the scale and impacts of re-greening, about how to build on current successes and the role modern communication technologies can play in this process. Before the coffee break the trailer was shown of the documentary by Mark Dodd about the life of Yacouba Sawadogo “The Man Who Stopped the Desert”. It resonated well with the 300 participants. It put Yacouba’s life and work into perspective. Subsequently, Mathieu and Chris got 45 minutes to present the African Re-greening Initiatives and the Chair of the Board closed the symposium with a short speech expressing his support. This was immediately followed by a press conference and several Dutch newspapers wrote the next day about the achievements of Sir Tim Berners-Lee, but also mentioned Yacouba and his impact on land rehabilitation in the Sahel.

4. With Sir Tim Berners-Lee, Steve Bratt, Stéphane Boyera, Prof. Hans Akkermans (Director VU Network institute) and his colleagues, we have new and formidable partners for the African Re-greening Initiatives. The many positive reactions of staff of the Faculty of Science involved in the Network Institute as well as of the Board of VU University, were very encouraging.


Washington “The Other Green revolution: How farmers reclaimed the desert to create an agricultural future for Africa”

5. The Obama administration is developing a “Global Food Security Policy” and will invest about 3.5 billion dollars in it. This initiative is subjected to considerable pressure to develop a conventional package: chemical fertilizers, new seeds, irrigation, mechanization, etc. OXFAM America decided that it would be useful to insert some other ideas into the debate and invited a delegation from the Sahel to Washington to tell about the scale and the impacts of investments in natural resource management during the last 20 to 30 years. The delegation from the Sahel was composed as follows:

Mark Dodd and his crew accompanied the activities in Amsterdam and in Washington to finalize the one hour documentary about Yacouba. 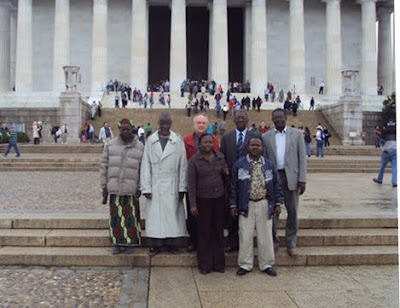 6. Presentation at Capitol Hill in the room of the Committee on Foreign Affairs to about 30 staffers of members of Congress (October 27). These staffers are the eyes and ears of Congress members. Both Yacouba Sawadogo and Sakina Mati (below right) made excellent short statements about the impacts of their work. 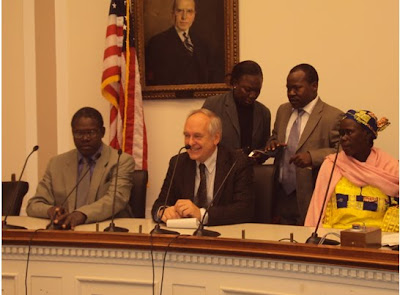 Just before the presentation in the Rayburn Building at Capitol Hill. From left to right: Mathieu, Chris, Edwige, Larwanou, and Sakina.

7. Presentations at World Wildlife Fund on October 28 by Mahamane Larwanou and Issa Martin Bikienga. About 30 participants. They made impact.

8. The major event was on October 29 in the Ronald Reagan Building. Three panels about the theme “The Other Green Revolution: Farmer-Managed, Agro-Environmental Transformation in the Sahel”. About 150 participants. Key note speaker: Mr. Franklin Moore, who is Deputy Assistant Administrator for Africa and the Obama Administration’s Global Food security Coordinator. Three panels: 1. Voices from the Sahel; 2. Practitioner’s Insights into the Obama Administration’s Global Food Security Initiative and 3. US Policy and The Other Green Revolution.

9. The reactions were overwhelmingly positive. It is of course not possible to predict whether the presentations will have an impact on the contents of the Global Food Security Initiative. The political pressures for a conventional approach are big. To use a biblical parallel, ee are like David against Goliath. However, the reactions of various USAID staffers were such that we may hope that USAID will get involved in the promotion of farmer-managed natural regeneration.

10. The key message that we all hammered on was….by protecting and managing natural resources in general, and on-farm natural regeneration in particular, you not only help farmers to adapt to climate change, you also help increase food production and reduce rural poverty. Trees are the backbone in this process.

11. A lunch presentation at the International Food Policy Research Institute (IFPRI) with about 100 participants. Also here…the message fell on fertile ground. If you like to watch the presentations we made at IFPRI…go to: http://www.youtube.com/ifpri and go to Other Green Revolution. Worthwhile to also quickly look at the one minute trailer on Millions-Fed: Provcn Successes. Or go to: http://www.ifpri.org/event/other-green-revolution 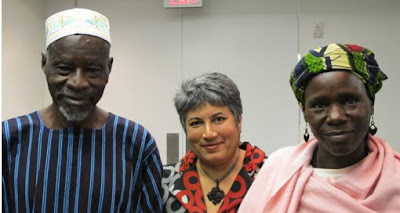 12. Other activities in Washington? Meetings with journalists (Washington Post, Bloomberg, Reuters….all.africa.com). It should be mentioned here that Gray Tappan of the US Geological Survey and our key remote sensing specialist joined us on October 28 during the presentation at World Wildlife Fund and before leaving Washington Gray Tappan and Mahamane Larwanou were interviewed by the National Public Radio (NPR) and this interview will be broadcast several times on NPR during the month of November. Gray Tappan has recently been diverted to coastal West Africa, but we need him back in the Sahel heartland for baseline studies as well as for the monitoring of changes in land use and vegetation

14. OXFAM America managed to arrange a tourist visit to the White House, which was not easy as this has to be formalized well in advance. I had a slight moment of panic when Yacouba wanted to rest and sat down on an early 19th century chair, which looked a bit fragile, but it ended well.

15. In terms of advocacy and partnership building, October was an extraordinary month. Our friends and colleagues from the Sahel did an extraordinary job. We want to express our strong appreciation to Melinda Smale and her colleagues of OXFAM America as well as to Aimée Niane of IFPRI, who moved mountains of work to get the Sahel delegation to Washington and to organize the program. How Yacouba and Sakina managed to get their messages across during the formal presentations with the support of respectively Issa Martin Bikienga and Mahamane Larwanou….. was a miracle. They even did not seem to nervous !!

16. This is not going to be the end of the story. We will try to monitor the impact of this visit to Washington and brief you about it in the next activity reports. 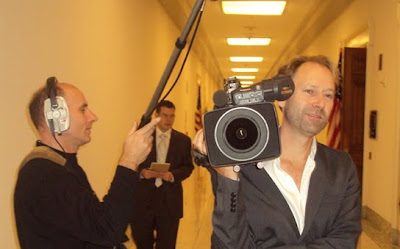 Mark Dodd (center), Ashley Norton (left) and Mariam Arnett (interviews…not on this photo)
at Capitol Hill. The documentary about Yacouba will be finalized early 2010.


17. Much more happened in October. For instance, Dr. Laurent Sedogo, Burkina’s Minister of Agriculture made a presentation in Iowa at the event of the World Food Prize; Dr.Dennis Garrity, the DG of the World Agroforestry Center, visited the Zinder region in Niger; a meeting with the Adessium Foundation in the Netherlands and their decision to support the preparation of an Ethiopia Re-greening Initiative. More about this in the next activity report.

18. I like to end this activity report on a personal note, which is a bit unusual, but it’s a nice story. Of course, it is motivating to present the African Re-greening Initiatives to very different audiences, to tell about the scale and multiple impacts of re-greening and to paint a picture of Africa that is quite the opposite of the perceptions that most people have about Africa. After my presentation in the second panel on October 29, I got off the stairs of the podium, a young African woman (from Namibia) walked up to me…and said “I feel so encouraged by your story, allow me to hug you”. She did not wait for an answer…and gave me two big hugs in the middle of that big meeting room. Well….that never happened before. It demonstrates that all of us have a story to tell that inspires and shows that it is possible to improve the livelihoods of millions of Africans living at the edge in drought-prone regions.