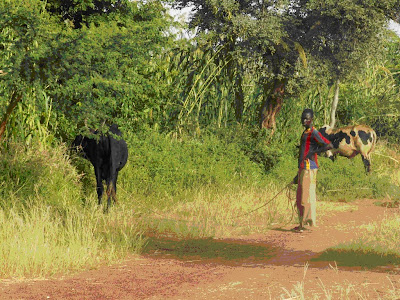 This picture was taken on September 27, 2009 in the Yatenga region of Burkina Faso. These are the fields of Ousséni Kindo. These fields were barren in 1985. Mr. Kindo is what is called a precision farmer. He treats each niche of his fields differently and has developed a system of conservation farming with numerous trees. He will get an excellent harvest this year. His son controls the grazing of cattle.


Some highlights of the last 30 days

1. In the third week of September, BBC World showed the documentary on re-greening in Burkina and Mali 4 or 5 times. The information reached us a bit late. None of us has been able to watch. However, the Earth reports of BBC World are viewed by about 250 million people all over the world…so the message is spreading. Mathieu Ouedraogo and Mary Allen, our coordinators in Burkina and Mali, play a key role in this documentary. The producers will send a DVD. We’ll explore the costs of making a French version of this documentary.

2. Had a brief discussion on skype with Peter Weston of World Vision Australia about a strategy for developing re-greening initiatives in Africa. This will be given a follow-up in the near future. My assessment is that building tree-based production systems will more easily find funding. Reason is that it is the only low cost way for farmers to sustainably intensify agriculture and at the same time adapt to climate change. Our challenge is to develop proposals as well as to develop the organisational capacity in different countries to implement these proposals. The continuing food (prize) crisis and the growing attention for adaptation to climate change will give us wind in the back.

3. Just a remark….our current knowledge of what farmers have already done to develop tree based production systems (agroforestry) is largely insufficient. We know about a number of cases, but much remains to be uncovered. Two years ago I travelled the road between Koutiala and San in Mali….and was impressed by the natural regeneration in the agroforestry parkland. Who has analyzed this case ? We still need a more systematic effort to identify and analyze existing successes upon which we can build !!!

4. At present Dr. Dennis Garrity, the Director General of the World Agroforestry Center, is travelling in Niger’s Zinder Region (October 5 – 9), to look himself at the large-scale on-farm re-greening. From Niger he will continue to Burkina Faso and Mali. Our colleague Mahamane Larwanou of the African Forest Forum acts as guide and Antoine Kalinganire of the Sahel program of the World Agroforestry Center is also part of this mission. Will try to update you in the next activity report.

5. CARE Denmark is funding a new project on farmer-managed natural regeneration in the southern part of the Maradi region (Niger).

6. Prof. Toudou has developed a first draft for a Niger proposal, which will be submitted by Both Ends to the Turing Foundation

7. The partners of the re-greening initiatives in Burkina Faso and Mali met on September 25 and 26 in Gourcy to discuss monitoring and evaluation as well as project implementation. What is going to be monitored, how and by whom? Réseau MARP will develop a system for self-monitoring by farmers. All agreed that establishing a good baseline situation is vital.

8. On this occasion, partnership contracts were signed between VU University Amsterdam and Reseau MARP and with SahelECO. There was excellent chemistry between all participants and a shared vision of the importance of promoting tree-based production systems in the Sahel.

9. On October 2, Mathieu Ouedraogo and Chris Reij had a 40 minute meeting with Dr. Laurent Sedogo, the Minister of Agriculture. Objective: brief him about the re-greening initiative and propose the organisation of an information session for key staff of the three ministries (agriculture, environment, livestock) and the directors of major agricultural development projects. The minister agreed and a date will soon be set. This may lead to mainstreaming of agroforestry in the major projects.

W4RA (Web for Re-greening in Africa)

11. This is the likely title of a new project to be developed by the Network Institute of VU University and the Web Foundation. As mentioned in the previous activity report, Sir Tim Berners-Lee, the inventor of the world-wide-web, will receive on October 20, a honorary doctorate of VU University. The new project will be developed around this honorary doctorate. This new project will be built around the African Re-greening Initiatives and its sister project SCI-SLM (Supporting Community initiatives in Sustainable Land Management).

13. This fact-finding mission did the following:

- A meeting with the elders of the village of Ranawa about how they use mobile phones. Each of the 160 families in this village has at least one member with a mobile phone. What they use them for…how they recharge batteries in a village without electricity….how they recharge their credits.

- A visit to the fields of Ousseni Kindo and Yacouba Sawadogo. 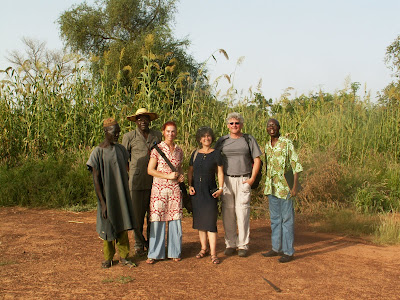 From left to right: Ouesseni Kindo, Mathieu Ouedraogo, Wendelien Tuyp, Anna Bon, Hans Akkermans and Saa Dittoh. They are standing on barren soil. This is what the field in the background was like in 1985.

- A visit to two cyber cafés in Ouahigouya.
- A meeting with the radio station “Voice of the Farmer” in Ouahigouya. Chris was after the meeting immediately drawn into the studio for a live interview.
- A visit to the mayor of Ouahigouya to draw his attention to the forest created by Yacouba Sawadogo and the threats to this forest.
- A meeting with the telecom company Zain (Celtel) in Ouagadougou. They have 1.5 million subscribers. Zain is interested in the re-greening initiative (corporate responsibility). It is possible, for instance, to craft short messages about trees and send these to all 1.5 million subscribers.


14. The key challenge is…how can we use all modern means of communication to share and spread info relevant to re-greening initiatives (from on-farm natural regeneration to community-based forest management). A workshop will be organized early in 2010 which will involve more partners. The Network Institute and the Web Foundation will mobilize funding for W4RA. One thing is obvious….relevant educational material will be collected and developed and put on a new website. Youth and women will get specific attention.

15. On October 20, a symposium will be held at VU University on The World Wide Web abd Social Development (see www.vu.nl/dies2009). Speakers: Hans Akkermans, Tim Berners-Lee (The World Wide Web – Humanity Connected)….Mathieu Ouedraogo and Chris Reij will have 50 minutes !!!! to present “Regreening Africa’s Drylands”. Interesting challenge. At this symposium the trailer will be shown “The man who stopped the desert”. This is about Yacouba Sawadogo, our farmer innovator from the Yatenga. He will be a guest of honour at this symposium. Mark Dodd, the documentary maker will be there to film and he will also be in Washington to finalize the documentary (see next point).

16. As also mentioned in the previous activity report, OXFAM America and the International Food Policy Research Institute (IFPRI) jointly organize a public panel on “Greening the Sahel”. It promises to become a big event. More in the next activity report, which you can expect just before mid-November…or earlier if there is groundbreaking news. 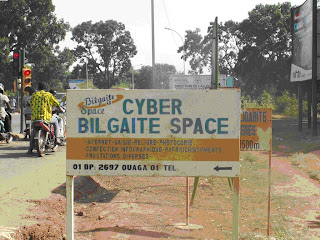 The invention of Tim Berners Lee triggered a booming cybercafe business in Ouagadougou and elsewhere. Watch the interesting name of this cybercafé in Ouagadougou.